Listen, Do You Wanna Know A Secret?

For the past four months, I have been sitting on some very exciting news, but I was sworn to secrecy so couldn't tell anyone about it. I say "anyone" but I think I would have not survived four months if I had told absolutely nobody. Instead I told three people, whom I trusted implicitly and I knew they would not be able to spill the news accidentally, so that it got into the wrong hands. But now I can breathe at last and publish the news........

KAY HAS GOT ENGAGED!!

I have known since the end of October, but she didn't, hence the secrecy! At that time her boyfriend (for the sake of this blog and anonymity, let's call him Darcy - for he is indeed appropriately handsome and everything you could wish for, just like Jane Austen's hero character)  contacted me and asked if we could meet in secret, when Kay would be not around. Immediately bells starting ringing in my head, but I tried not to get too excited. A few weeks passed and a weekend came in early December, when Kay was up in Yorkshire visiting old uni friends.

Darcy came over to see me on the Saturday evening and looked very nervous. He told me he had been with Kay for six years now, loved Kay very much and couldn't envisage life without her. He wanted to ask me two questions. The first was whether I would be happy if he asked Kay to marry him.  I was so touched by his old-fashioned approach of asking me first if I minded. Of course I said YES. The second question was whether I would help him choose the ring.  Kay has often given me ideas of what she likes and doesn't  like when choosing rings, as  recently we had been looking in jewellery  shops for me to buy her something to mark her 30th birthday last summer (six months have gone by since July and I still owe her a 30th present). We have often nonchalantly looked at engagement rings in the window as we  inevitably passed by them  and she had commented on exactly the kind she would like, if ever her relationship with Darcy got to that stage. So I had a pretty good idea and Darcy knew this.

In early January, Darcy and I arranged to meet one day in Hatton Garden in Central London. I had suggested this, as there are not many jewellers locally, and those that exist are often little niche boutiques and therefore the choice is pretty limited. I felt Hatton Garden would swamp us with shops and help us decide. Sure enough, there were zillions of jewellers not just in Hatton Garden street alone but in the labyrinth of backstreets too. If we so much as glanced in a window, someone would come rushing out to accost us, asking what we wanted and invite us inside so that they could show us all they had. We got very good at giving them a put-down and in the end restricted our search to four shops that had received good reviews online.

I had already done my homework beforehand and felt quite the expert, reinforced by the talk  the various jewellers trotted out when we sat down. When choosing a diamond, you have to be aware of the four Cs:-

All the while I felt like I was with my toyboy, so had to make it plain from the start in each shop that I was the mother-in-law from hell and not the bride!  That comment produced many a smile and somewhat eased the tension (and strange looks as we walked in).
We were shown many shapes, sizes and versions of the four Cs. There was one shop where Darcy and I felt it was the best of them all. We were pretty much decided on the perfect ring, but wanted time to think about it, so left contact details with the shop and said we'd get back to them after a few days.
A few days later, Darcy had made a decision and put a deposit down on that ring. We arranged to go back in late January to collect it, once it had been polished and its setting checked. Also the diamond had a unique ID number engraved into it (not visible to the naked eye) which means if the ring is ever stolen or lost, it could be traced back to its rightful registered owner.
Now, Darcy had visions of when he wanted to propose. Not on their 6th anniversary in late December, nor on Valentine's Day, but in a place that meant a lot to them, but that could only be done while they were on holiday and that holiday was not until this week. So from late October to late February, I have been bursting to tell all and at the same time falling over myself not to spill the beans to Kay, every time I spoke to her, particularly as I was conferring with Darcy behind her back.  Darcy finally proposed to her on Tuesday  (an auspicious day as the date was 22.02.2022) on a romantic walk that meant a lot to them both and the secret is, well, no longer a secret! She said YES.
Now I can relax - but only for a bit. After all, I've now got wedding planning to do and, in the absence of Greg, who would certainly approve of Darcy,  of that I am certain,  I've got a father-of-the-bride speech to write. Wish me luck.
Posted by ADDY at 06:52 8 comments:

For some strange reason, I often wake at exactly the same time in the middle of the night. I am not sure why.  Seeing as I live close to a railway line, maybe that's the time when the first commuter train to London passes by or maybe it's an aircraft flying low as it makes its descent towards Heathrow airport. It may be neither of those things and an inherent part of my bodyclock. Goodness knows, but I can get quite excited rather than upset when I look at the clock and see..... 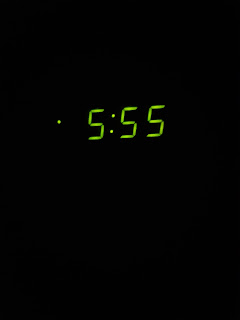 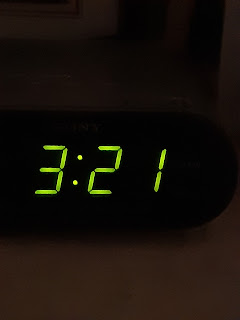 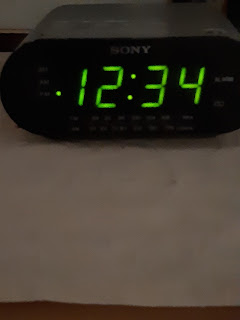 Two of my choir friends gave me an amaryllis plant at Christmas. It was already potted with a huge bulb protruding above the soil and about two inches of stalk growing from the bulb. I didn't have a chance to deal with it before Christmas, but took it out of its box in late December and followed the instructions to put it near light and keep it lightly watered.

For a week not a lot happened, but by early January the stem started slowly to grow taller. By mid January it was a good foot tall.

By late January it was two feet tall and a bud was visible. 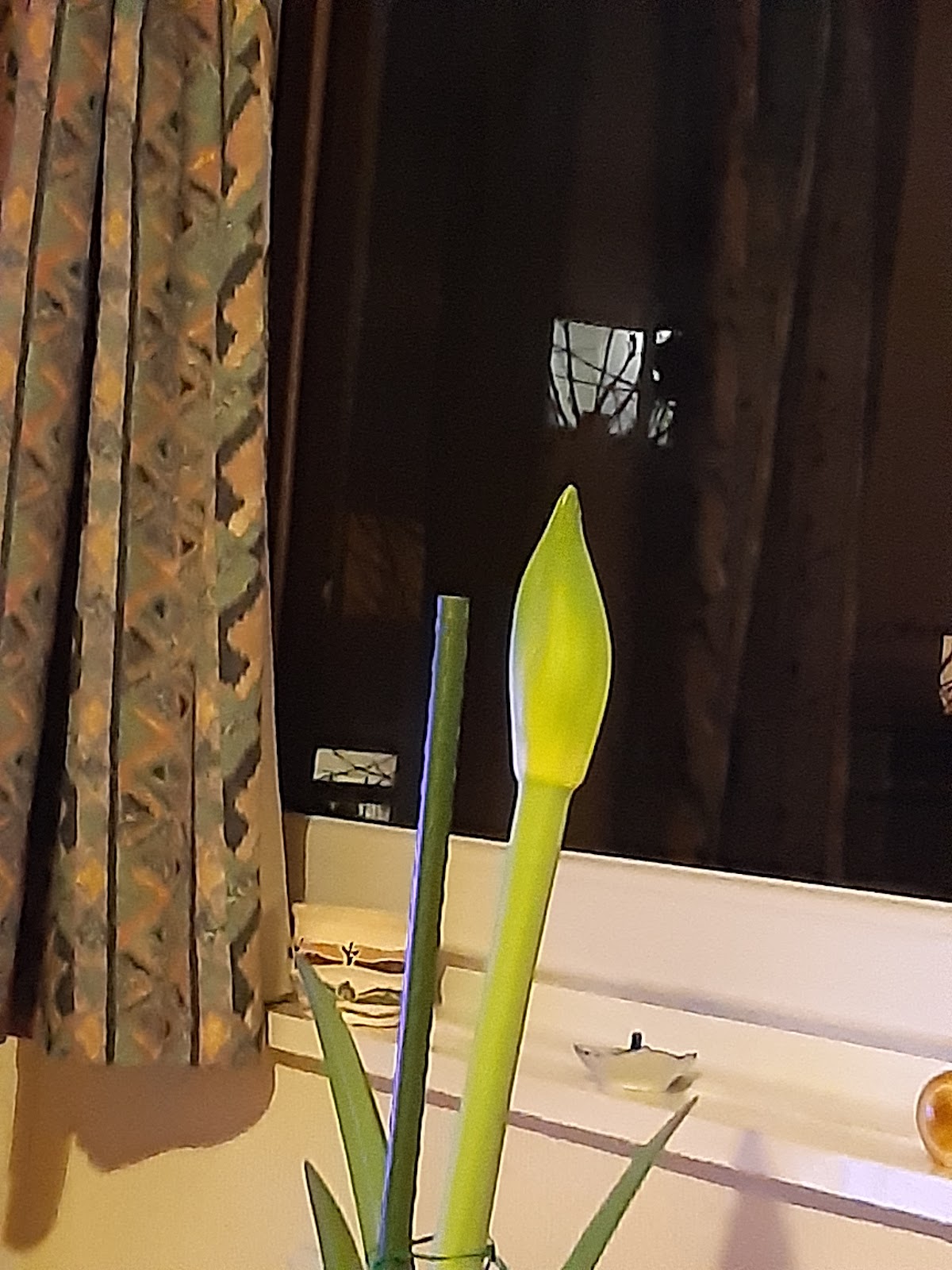 The bud pushed higher and higher each day until you could almost see it grow - it was gaining about 2-3 inches each day. I put a stake in, as I was afraid the stem might not take the weight of the bloom.

The bud pushed higher and higher above the stake. It got to three feet tall and then the bud started to pop into five segments. 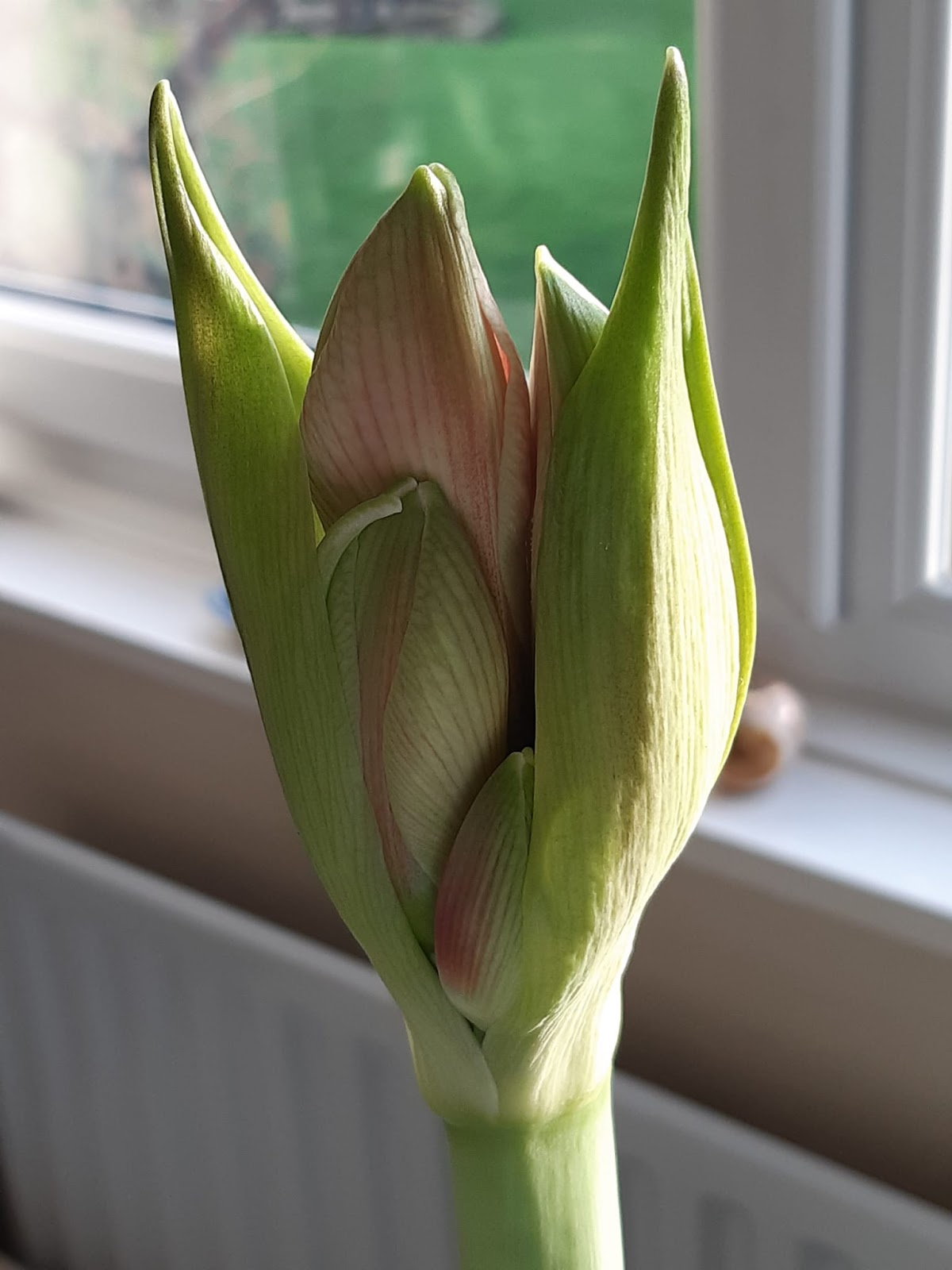 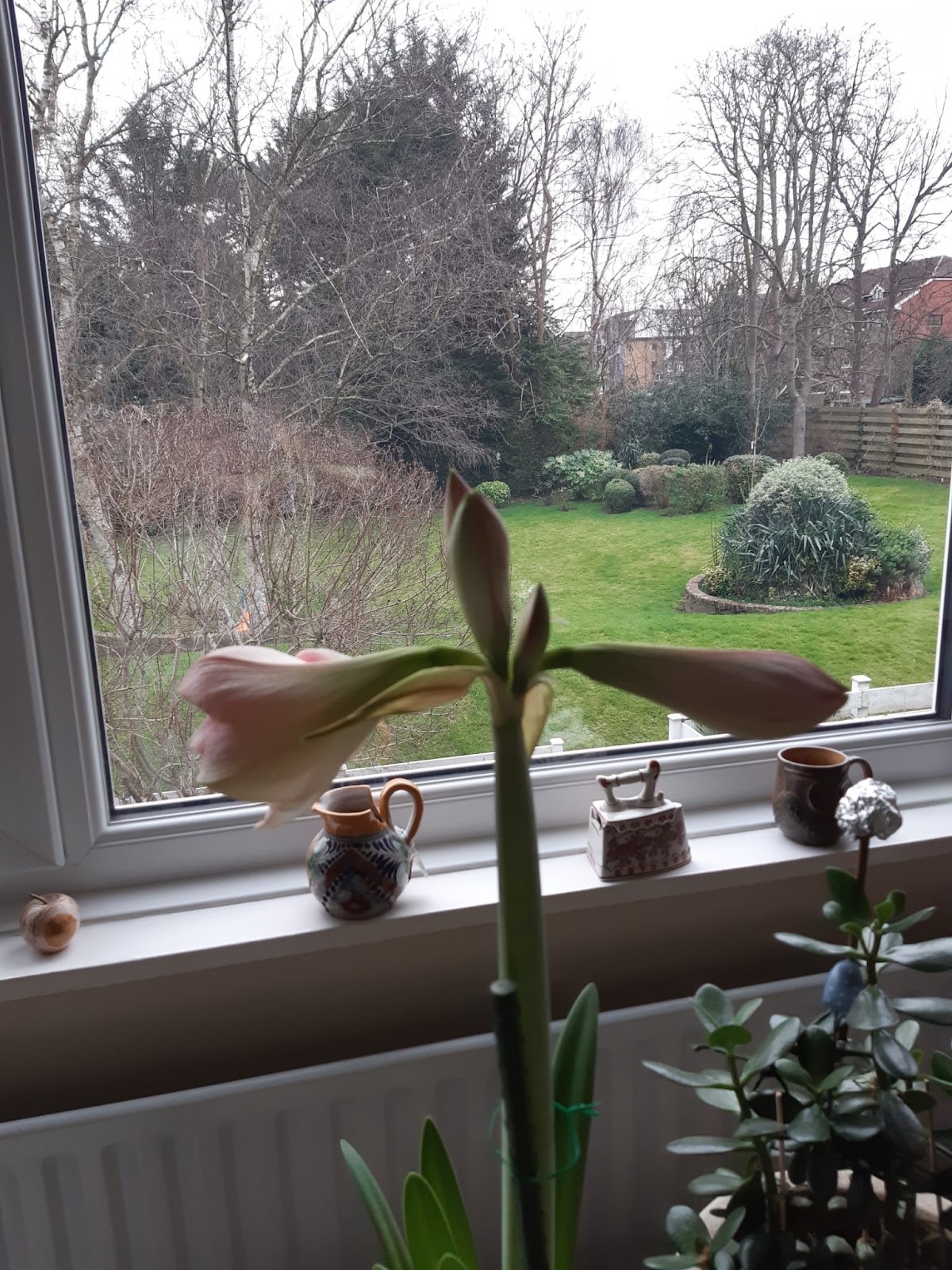 During this week, the individual segments have popped and the most beautiful blooms have appeared, each 8 inches across in diameter (the size of a bread-and-butter plate). It really is a beauty to behold. 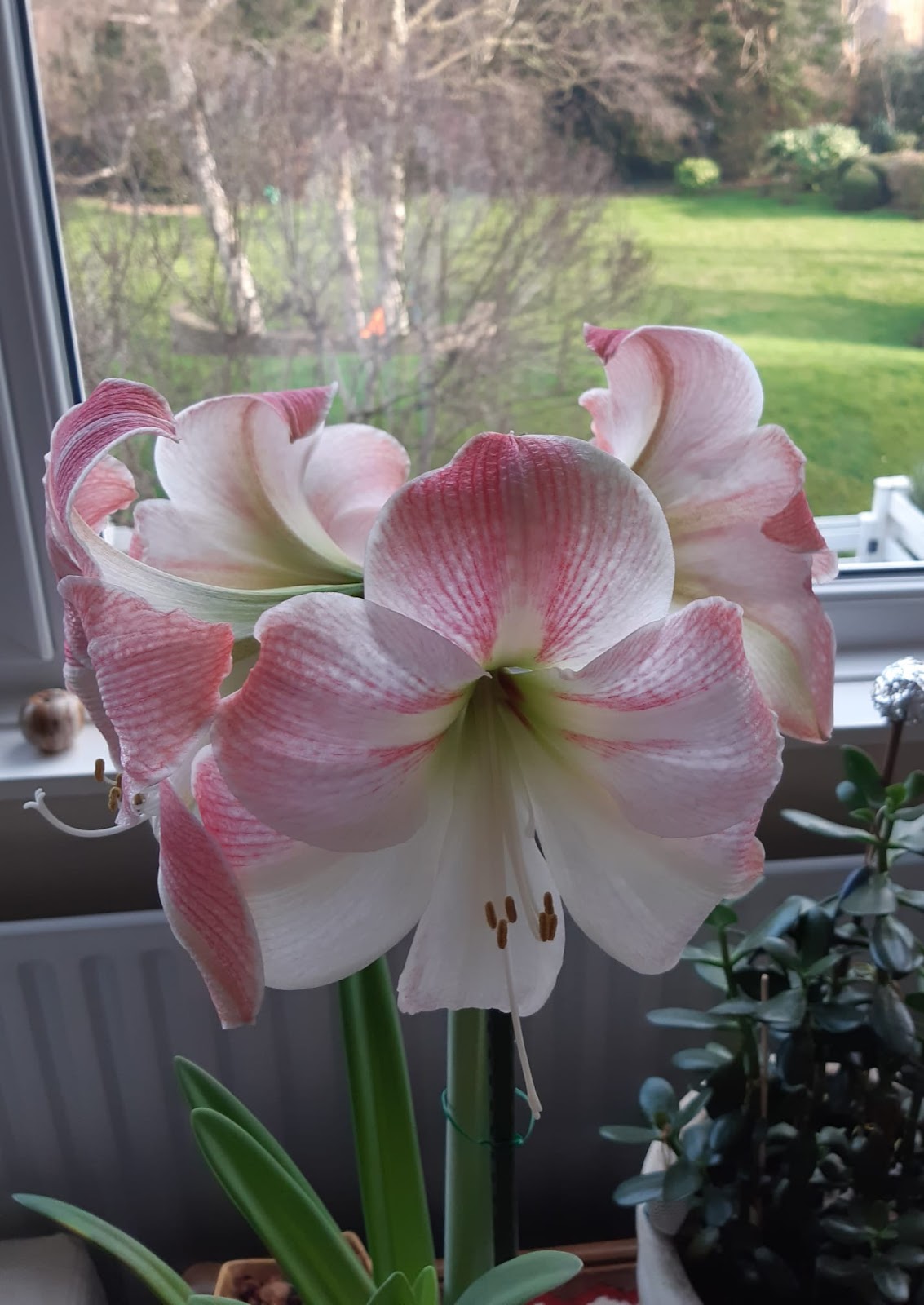 I had never had experience of an amaryllis before, but I certainly can recommend having one.  They provide so much joy watching them shoot up and bloom in a matter of SIX weeks. Apparently with the right care, you can cut them back to soil level and leave them outdoors over summer, then bring them back indoors before winter and start them off again in December. Fingers crossed I can get the same enjoyment next winter.
Posted by ADDY at 12:05 3 comments:

You may have noticed (or not) that I have not been posting for weeks. My diary has been a merry-go-round. Apart from the usual stuff that keeps me occupied, I have been experimenting with new things.

My friends and I are still looking for a choir that has a similar sort of vibe and repertoire as our old one that broke up in March 2020. The woman who ran that had simply given up under pressure, as she had too many irons in the fire and couldn't cope. The choir was the one thing she apparently found dispensable. The lockdowns were the perfect excuse not to continue and we were dumped unceremoniously by email. I had made four lovely friends through that choir and we became "ladies wot lunch" outside the choir rehearsals. Once lockdowns and choir restrictions were relaxed, all five of us sought to find a choir similar to the disbanded one. We found one local choir in September that we love and will continue with that, but the genre of music is more semi classical (whereas the old choir was lighter - pop, soul, folk, musicals) so it still did not quite fit the bill and we wanted to find a second one. as a contrast.  We must have tried umpteen different choirs since September and from January we continued in earnest to find more. Two weeks ago, we tried another. It is supposedly more light-hearted although this term we are singing the entire score from Hamilton - for those who know that musical it is predominantly rap and very challenging. I think we shall persevere if only for the challenge! Unfortunately, despite very stringent rules (open windows in freezing weather, lateral flow tests before rehearsal, nobody to attend if they even have cold), we received emails ten days ago to say the choir leader and eight sopranos have all tested  Covid-positive, so this week we have had a firebreak and there has been no rehearsal.  I have been testing  every day for the last ten days and so far so good......

The other demand on my time has been that I have joined a gym. I really enjoyed the twelve free NHS-referral sessions I had last autumn, so felt inspired to take up membership. Membership for the over-60s costs less than the weekly single pilates class I used to go to, but membership allows me to go to the gym as many times and for as long as I want, get a choice of over 100 classes a week and use of the swimming pool. It is, as they say, a no-brainer. I've had a health-check, in which I was told I have a metabolic age of 56 (in reality I am 71), so that cheered me up no end,  and my bone density is fine for my age as is my blood pressure. I need to lose half a stone (the excesses of Christmas and a November birthday always pile on a few pounds). I also had a proper induction to all the equipment in the gym and have managed two classes all in a week. I have another 98 classes to go to and see which ones become my favourites, so am feeling positive.