Putting on the Ritz

Kay has had a rather elongated 21st birthday which has lasted nearly two weeks. It started on the actual day itself (14 July) when we celebrated quietly with my mother, going for an Italian meal and finishing off with seeing Les Miserables. Then a week later she celebrated in more flamboyant style with her uni and school friends (as also reported here). Yesterday was one last little celebration for just her and me - a special something to remember for all time for the both of us. I feel, in the absence of Greg, as if I have had to be both mother and father to Kay at this momentous stage of her life and wanted to make up for the lack of Greg in her life right now. 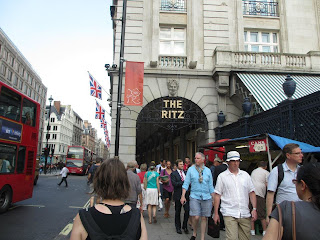 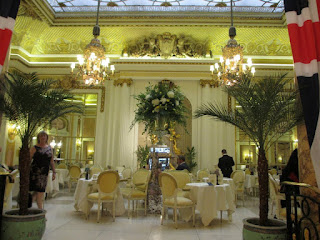 It was exquisite and well worth the money. Something we will both remember for a very long time﻿.

Afterwards we waddled with glucose-laden tummies down Piccadilly, looked at the new Bomber Command memorial 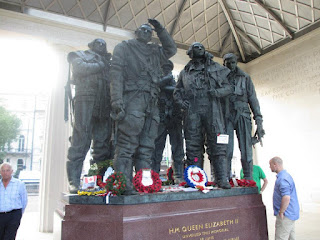 and on past Buckingham Palace, where the usual policemen on the beat were carrying machine guns. All a bit menacing but meant to protect us in the run-up to the Olympics which open tomorrow.

A year ago, parts of London were being torched and looted by kids. That was a Bad Thing. This week, parts of London are seeing a torch again but that is a Good Thing! How things can change!

As the Olympic Torch was less than half a mile away from my house yesterday morning, Kay, her friend and I went to wave enthusiastically. It was quite a carnival atmosphere, even well before the torch arrived. 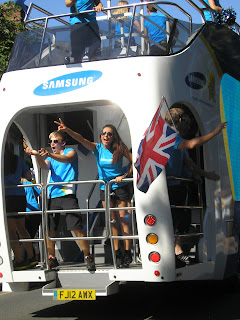 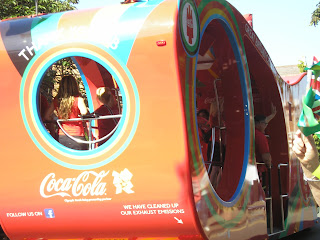 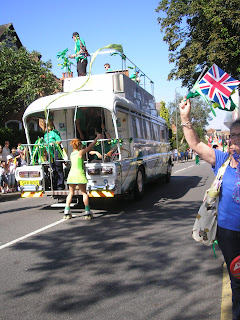 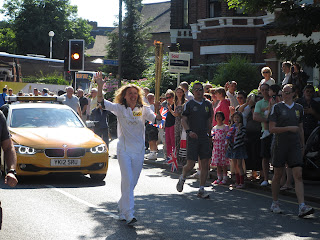 The weather miraculously complied too. Perfect!
Posted by ADDY at 13:00 9 comments:

Kay and I had a lovely day on her 21st. After she had opened her presents, we went out locally for a lovely Italian lunch, taking my mother too who was staying with me for a couple of weeks. Much hilarity ensued in the restaurant when my mother (who is nearly 89 and a bit hard of hearing) said in rather loud voice "I can't find my nuts. What are my nuts called?" She was of course referring to the pistacchio dessert she had ordered.

We rounded off the day going to the West End to see Les Miserables, one of Kay's favourite musicals which her school had bravely put on many years ago. Although we knew all the music off by heart (and Kay plays some of it on the piano), it was still a joy to hear the beautiful voices of the cast. The stage play and scene changes were absolutely ingenious and mesmerising too.

Snoopy's mouth continues to improve and he has bounded back from his anaesthetic with no problems. For a dog getting on for 14, he really is a wonder at times.

I have a house full of 21-year-olds this coming weekend, as Kay's friends from uni come down to celebrate belatedly with her. They're going to be clubbing on Friday night and returning to my house in the wee small hours of Saturday morning. Time for some earplugs, I think.
Posted by ADDY at 10:30 8 comments:

Key of the Door

My baby is 21 years old today. It seems like only yesterday when she was born. Where DID those 21 years go? I was pregnant with my first and only baby at 40, had a model pregnancy and a model birth, making it to the hospital with only 90 minutes to spare! Having waited so long to get pregnant in the first place,  she was a sheer miracle and we were more than ecstatic when she arrived. Now, 21 years on, she is a beautiful, intelligent, kind and caring adult with her whole life before her. Happy Birthday, darling x

Snoopy has been looking hang-dog recently, as if he wanted to slit his wrists. He lies around all day sleeping on the sofa, only occasionally rearing his head, when he can be bothered. He has ongoing gastro-intestinal problems which the vet thinks is probably due to a tumour on the liver or pancreas (but which the vet intends to leave undisturbed as Snoopy is 13.5 years old and not up to operations or being pulled about for little gain). He also has very bad arthritis, but on some days he jogs round the park chasing squirrels and on others he plods slowly sniffing every blade of grass.

Recently though he has had very bad breath which I put down to whatever was going on in his stomach, but the other day he started rubbing his mouth along the sofa cushion and when I looked his gums were bright scarlet and some of his teeth very decayed looking. A trip to the vet revealed he has gingivitis and so Snoopy is going back to the vet this morning for a general anaesthetic for a scale and polish to his teeth. He'll then get a course of antibiotics to deal with the gingivitis.

I'm a litttle nervous what with him being so old and  it being Friday 13th and all. Fingers crossed.

Update at 10pm - collected him from vet this afternoon and he came out tail wagging and with a spring in his step. The dental treatment included claw-clipping too (they had got enormously long) and it has made a new dog of him. He was a little groggy tonight but starving hungry and I was instructed to only feed him a third of his supper to avoid him throwing up. I think he was a tad disappointed he could not have the other two-thirds!

Kay's been back with me for 4 days, as I helped her move back home on Thursday for the summer vacation. She got the news this morning that the new student house she moved into last week has already been burgled. The front door (which didn't have a proper door lock on it and about which Kay had complained to the agent when she moved in) was kicked in but fortunately the alarm scared them off and nothing was taken.  Kay rang the agent to see about getting a new "proper" lock fixed immediately and the agent didn't seem too fussed about it, claiming they were too busy to send someone out to do it, yet they are fussed enough to rake in £1800 every month for the six-room house. It's a scandal.

Oh, and it would have been my 36th wedding anniversary today (10th) and two years since Greg's ashes were scattered.﻿  A fine week it's turning out to be.
Posted by ADDY at 23:25 8 comments:

Miracle of miracles. I actually got a cold caller to hang up on me today.
Having been inundated this last few months by the same jolly jolly automated-voice call feigning surprise that I had not rushed to grab taken up their horrendously expensive  bargain offer of loft insulation, I was annoyed to receive yet another one. Instead of banging down the receiver and yelling expletives, as is my normal wont, I decided to "press one" to speak to an adviser. With absolutely not even an infinitesimal time delay at all, a cheery adviser (obviously already working out her fat commission from a potential sale) sprang into action and proceeded to say she wanted to ask me a few questions first.

"No," I screamed, "I want to ask YOU a question first. Why do I keep on getting inundated with these calls about....." The line went dead. She had hung up on me and all before I could tell her I don't even have a loft. I've got a flat roof, you see. 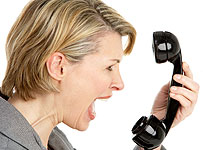 picture courtesy of thisismoney.co.uk
Posted by ADDY at 11:09 5 comments: