A couple of months ago, I stupidly reacted to an advert that popped up on my smartphone feed. It was for some sandals that looked rather snazzy and I clicked BUY in an instant. The price including postage was $47.88. I did wonder if the retailer was in the USA, because the price was in dollars, but thought no more about it.

Weeks went by with no sign of the delivery but finally my fears of a no-show were allayed some four weeks later when the postman delivered the parcel.... covered in Chinese stickers and customs labels. Like a kid on Christmas morning, I opened the parcel and eagerly tried on the sandals. They didn't fit. Feeling like one of the ugly sisters when the Prince turns up with the glass slipper, I tried and tried to get my foot into the sandal, but my toes hung out the end by several inches.  I had ordered a UK 6 or European 39. Then I looked at a label stuck to the sole. They had sent me European size 36 or a UK size 3. No wonder they didn't fit.

I dug out the order confirmation email and contacted the company explaining that they had sent the wrong size. I offered to send the shoes back and requested a refund or replacement.  The next day a girl called Allina replied. She was sorry for any inconvenience and suggested I keep the shoes and they give me a 10% refund. Alternatively, I could reorder and get a  20% discount. She clearly did not understand they had sent the wrong shoes and that I did not want to either suffer a 90% financial loss or reorder paying a further 80% more for their mistake.

When I went back onto their website this message filled me with confidence!

I messaged Alina back, saying I could not accept her offer. Dutifully she replied the next day raising the refund offer to 30%, meaning I would still pay 70% of the cost for shoes I could not wear because of THEIR mistake.

Again, I messaged Allina and said I could not accept her offer. It was THEIR mistake not mine and I wanted a full refund or a replacement with the correct size.

The next day Allina replied. The best they could offer was a 50% refund but I would need to return the shoes and she suggested the postage, which I would have to cover,  would be high, making it an even worse financial loss for me. I reminded Allina that it meant I was still paying for her company's mistake. It fell on deaf ears.

In frustration I approached Paypal. After a week or so in their resolution centre, they sided with me. However they said that I would have to return the shoes to China, pay the tracked postage, get proof of postage to upload onto the Paypal website and then I would be refunded the 100% cost of the shoes.

When it came to post them, I was rather shocked that the cost of the postage and tracking would be £16.60, almost half of the refund I expected to get. I decided I would have to accept that as the best I could hope for and chalk it up to experience. For a split second, I did wonder whether it was worth even going through the return process, but my anger over Chinese customer relations got the better of me. For me, it was now not so much about recovering my losses, but more a war against unfair consumer practice.  I decided I would sooner lose 50% of my costs to Royal Mail to send the shoes back than give a penny to the Chinese company whose customer service is non-existent.  This morning, Paypal inform me, having seen my proof of postage I uploaded to their website, that they have refunded my account with the total cost of the shoes and charged the Chinese company. I feel somewhat relieved and slightly smug. Is that bad of me?

Needless to say, I shall steer clear of adverts in the future which involve trade with China. It just ain't worth the hassle.

I can remember exactly what I was doing thirty years ago today on 14 July 1991. I was in labour at our local hospital. Just after lunch I had the very beginnings of labour pains and by 10:54 pm our darling daughter Kay was born. She was very much wanted and our one and only. I had conceived naturally at the age of 40 after a decade of disappointment, just when we had given up all hope. Given I was a geriatric mother, it all went swimmingly well - the pregnancy and the birth itself. Greg took her in his arms and sang La Marseillaise as she was born on the French Bastille Day!

Kay did not and has never disappointed us. Apart from not sleeping through the night until she was eight years old, she has been a delight and wonder. Even when her father died in her first year at university, she pulled all her strength together to carry on with medical school and has become the successful career woman she is today.

Last week we celebrated an early 30th (and my belated 70th) with afternoon tea at the Savoy. We got all dolled up and took the train to central London - for me the first journey in a year. We were treated by the Savoy staff like royalty. Afterwards we strolled over the bridge to the Southbank and basked in sunlight watching the evening crowds strolling along. The following day we were joined by her boyfriend and had another grand celebration at home.

Kay has now taken a much-needed break from her strenuous 16 months in Intensive Care and has two weeks relaxing in Cornwall with her boyfriend. She deserves it so much, as she is physically and emotionally spent after what she has dealt with at work. She'll be celebrating again today. 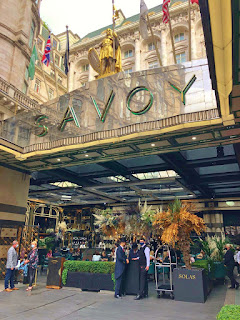 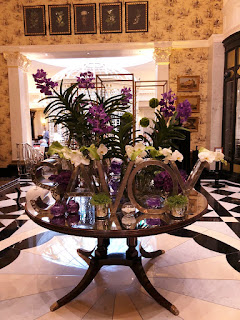 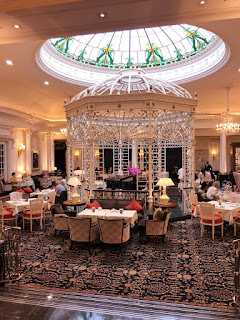 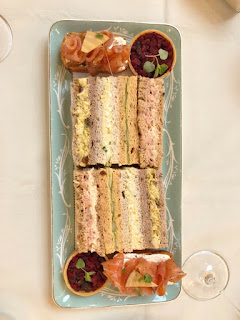 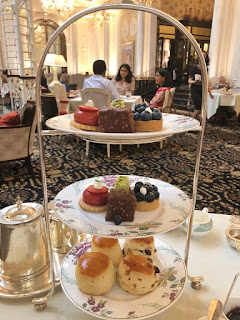 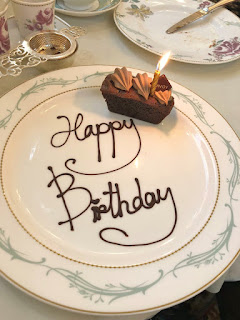 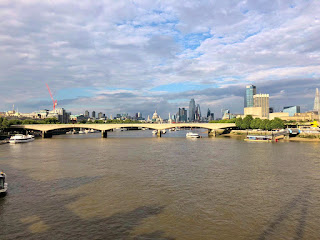 Having lived in almost total isolation for the last 16 months because of Covid  (not going out for anything including not for groceries) and having only seen Kay on a handful of occasions since last August, with the occasional distanced chat with a neighbour if out walking round the block for exercise, I think I have coped quite well. It is true I have watched far too much television and almost worn out the remote control. I have probably watched about 4 or 5 hours a day.  I  don't think people who have isolated in couples have quite understood the sheer loneliness of living alone. But as I am an only child, I am used to occupying my time constructively. I have also done lots of knitting for charity, joined a zoom choir and  started to learn Italian. As well as gardening and sorting through my late mother's stuff, the months have passed with my mental health reasonably intact.

However the last few weeks and the last week in particular has seen a drastic contrast in my lifestyle. My first foray into the outside world came when the foodbank I volunteer at asked if I would consider returning to use the sewing machine for guests with clothes that need repairing. As the food side of foodbank has been done during the pandemic outside the church and I would be inside the empty church to use the electricity for the machine, I considered it a reasonable first step to make.  I've been doing that for the last few weeks. But gradually friends, who have been equally as cautious as me, have been suggesting get-togethers. Last week my diary was so full  I was out every day either visiting the hairdresser, getting plants at a garden centre, meeting three  different sets of friends and of course foodbank. I even went into a few shops!!

I must say it felt very strange, almost like being on holiday in a foreign country. What are the rules and local customs? Do shops take cards or cash? Should I wear a mask on the station platform or just in the train? Should I stand 1 metre or 2 metres apart in the queue? What do the locals do? It was however lovely to spend time not watching television  or trying to fill my time, but instead to catch up with friends and their news. (One of my friends for example told me that her daughter is friends with the up-and-coming tennis star Emma Raducanu who lives in our locality and had even played tennis with her.  Even more exciting to watch her now. There's name- dropping for you.)  I laughed and giggled so much with my friends I nearly cried. Something I haven't done in months. Laugh, that is. It has been a glimpse of how things might be in the not too distant future. Now I, and most people, have been double-vaccinated, I am hopeful we can start to return to some kind of normal in a few weeks when restrictions allow.  The vaccines are keeping hospital admissions down even though cases may still be on the rise. Kay confirms this is the case in her hospital. Yes, covid is here to stay, but we have to learn to live with it with sensible precautions.  I feel more than ready to leave my cage.