I apologise to anyone who has left a comment on my blog in the last six months only for it not to be published. After a spate of comments in either Chinese or from people who had found happiness through Dr Quack and been reunited with their philandering husband, or who with the help of Mr Wooloveryoureyes had won a lot of money, I decided to impose comment moderation on all comments. In the beginning, I  used to be notified of comments by email, so was able to accept or delete them. However, over the last six months, the comments had dwindled to nil and I was getting no notifications whatsoever in my email.    Thanks to Yorkshire Pudding, I have discovered that people were indeed leaving comments, but I was unaware of them.  I am not sure what happened, but have found the solution and discovered 120 comments awaiting comment  moderation. Now a good third were from Dr Quack or Mr Wooloveryoureyes followers, but the remainder have now been published belatedly. Apologies again and many thanks to Yorkshire Pudding for bringing this to my attention.

Changing the subject drastically, I suddenly realised that last month saw my 10th anniversary of blogging. Way back in May 2008, when I was troubled by my husband's alcoholism and needed an outlet to put all my fears and frustrations to cyber paper, I tentatively started my blog. Here is that very first post. Incidentally I wasn't known as Addy in those early days, but Rosiero. I later changed it to Addy (AD being short for Alcoholic Daze). But neither are my real name in any case, as  anonymity is important to me. The blog led from being an outpouring on my part to helping others in similar situations, then morphed into a diary for me to keep. Never in a million years did I think I would still be writing it ten years on.
Posted by ADDY at 10:31 4 comments:

Messing about on the River 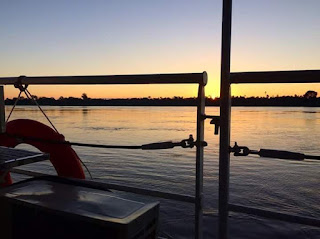 She is currently having the experience of a lifetime. She has come to a natural hiatus in her career. The time between being a junior doctor for just two years and starting the hard slog to the next major rung of Registrar. Before embroiling herself in the next two-year phase of hospitals and exams combined, she wanted to see the world. It wasn't going to be possible once she put her head down and worked the arduous schedules that a doctor has to work.  It might not also be possible once she got tied down by mortgages or children of her own.  So it was now or never at the age of 26 years old. She was going to take a year off the career ladder and have a delayed GAP year.

She had a plan.   She spent the first seven months (August to February) working as a locum in a big London teaching hospital, squirreling away the high fees locums can earn. That fund was to support her financially over the remaining five months (March to July) when she would go travelling. Her boyfriend, a dentist, did the same.

In early March, the two of them set off.  First to Thailand, where they visited umpteen temples, lounged on golden sands in deserted coves,  played with elephants and learnt how to cook Thai-style. 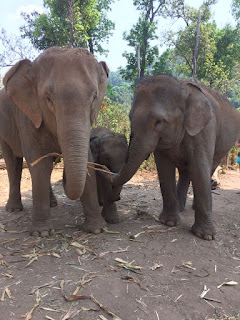 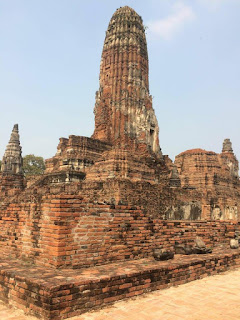 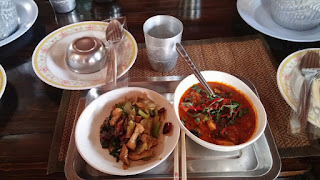 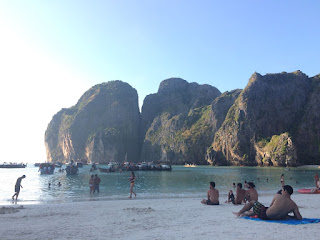 Then on to Cambodia to learn of its horrific past of Khmer Rouge and Pol Pot. Next was Vietnam with its crazy bikers in Ho Chi Minh City, its quaint sea resorts and the bustle of Hanoi. (Not to mention that monkey bite.) 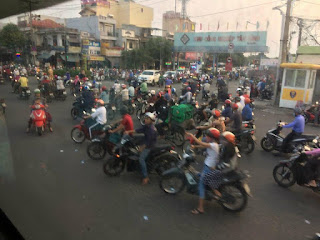 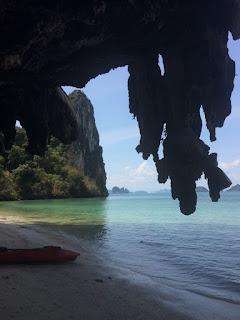 Then on to South America, starting with Argentina, where they learned to tango (it does take two),  admired the haunts of Eva Peron (Evita), and took in tours of the Malbec vineyards. 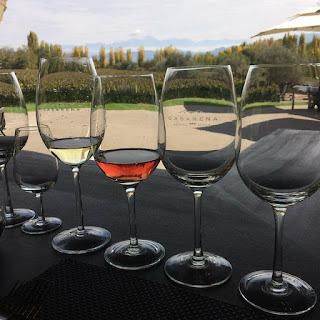 Then down to the deep Patagonian south of the continent, the "end of the world", where they climbed glaciers 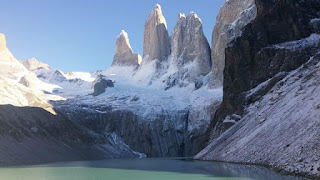 and watched sea-lions and penguins, just as Charles Darwin would have done. 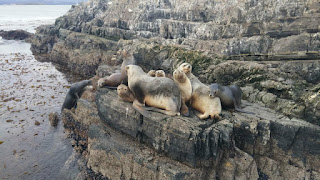 On to Santiago in Chile.  The Argentinian and Chilean painters and decorators alike seem to have had a field day and gone berserk with a job-lot of paint. 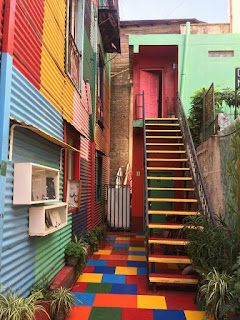 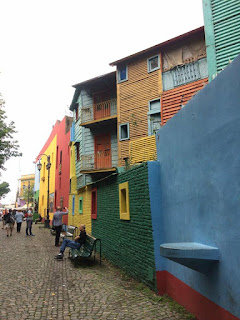 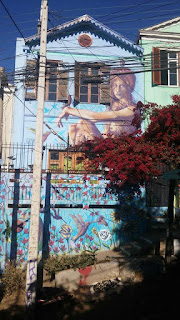 Then sand-boarding in the desert followed by crossing the salt flats in Bolivia, ending up at Lake Titicaca in Copacobana (and not the one Barry Manilow sings about). 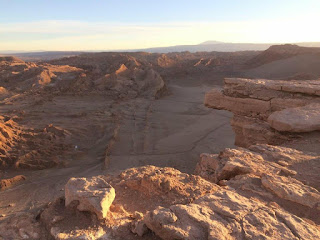 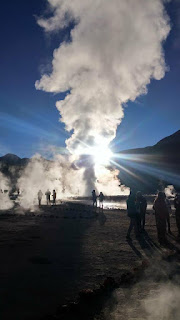 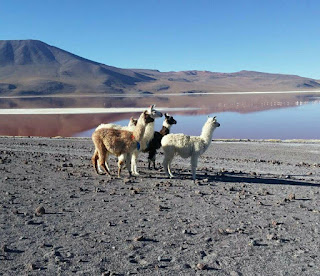 Next to Peru and the main part of their tour, not to mention the title of this post. They have volunteered to work with a charity that runs medical boats along the Amazon. These are floating clinics staffed by doctors, nurses, dentists, midwives  and physiotherapists. Most of the medics are Peruvian, but foreigners can volunteer to work free of charge on the boats for the experience. These boats call in at remote villages where the only access is by river. If these boats did not come, the villagers would have no access to a doctor. Kay and boyfriend are, as I write, currently on board, treating tribes who are highly suspicious of modern medicine, but resort to it when their own herbal remedies fail. 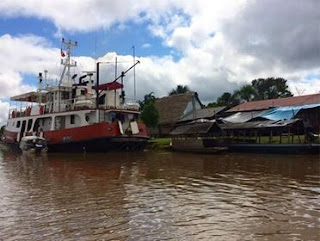 Kay is also out of internet contact, because they are in the middle of the rain forest. I shan't hear from her for another five whole days!!!   (How my parents coped when I went off to Germany for a year in 1971 with only snail mail, which took a week to get anywhere, or the very rare highly expensive phone call from a kiosk, I shall never know).

The next thing on the list, after the Amazon trip, will be a trek up to the summit of Machu Pichu. Then on to Ecuador and Colombia, before the flight back home towards the end of July. I expect they will both be very weary. Kay starts her new job back on the career ladder on 1 August.  She'll need a holiday first!

She will have experienced so many sights, sounds, smells and changes of cuisine from nine different parts of the world. Something most people never get in a lifetime. What a marvellous experience.

I had to meet some American friends at their hotel in Kew on Friday, as they were in London on a whistle-stop tour doing some research at the nearby National Archives for a book they are writing.  As I wasn't meeting them until 7pm, I decided I'd get over there a bit earlier (five hours earlier to be precise) and have a look at Kew Gardens. Such a long time since I was last there.... I think I may have even been under ten years old!

The weather  was changeable. The internet forecasts kept changing from being dry and sunny to rain. It was touch and go whether I'd do it at all, until the very last minute when the forecast changed yet again and showed it would be dry.

Mind you, when I got there, you'd have been forgiven for thinking it might rain. But thankfully it didn't. There aren't many places to shelter, if it does, and most of the 326 acres is open to the elements. 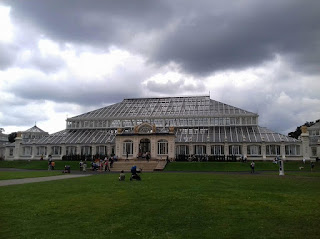 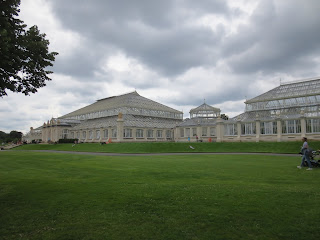 Inside as well as outside. 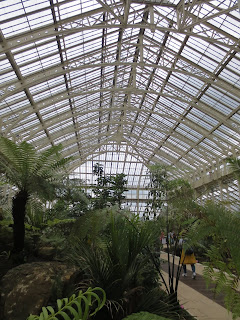 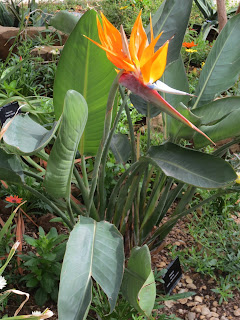 The Giant Pagoda and the Japanese Gateway installed calm in me. 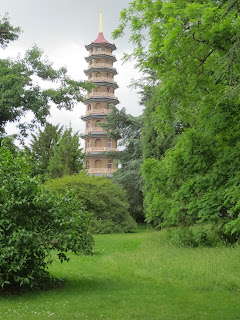 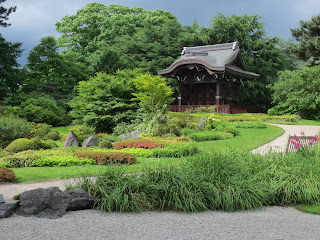 At one stage I found the lake and sat down for a rest. 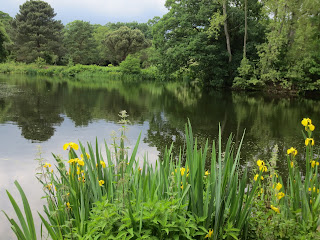 I made a friend. It came out of the water and started pecking the ground near my feet. It had very big feet. Almost as big as mine! 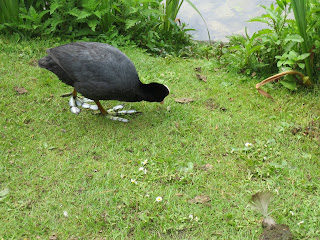 After a short stay I wandered over to the Palm House. 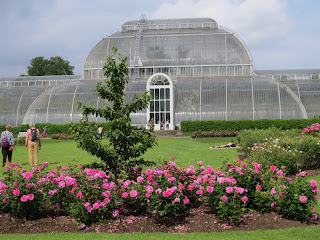 It was very hot and humid in there. 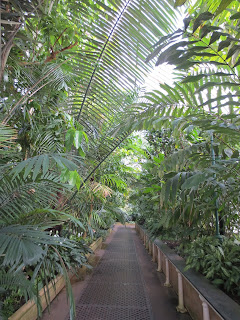 Then on to the Bee Hive, commissioned by the UK for the Milan EXPO 2015, which gives an insight into a bee colony. 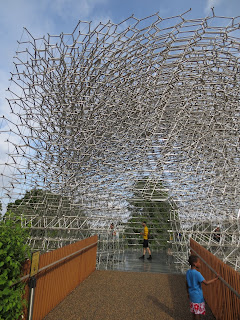 Then another rest by another lake, 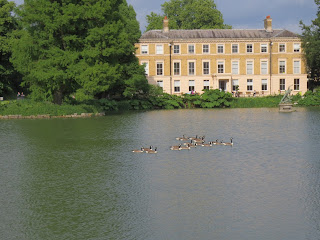 before it was time to meet my American friends nearby.
Posted by ADDY at 09:53 3 comments: