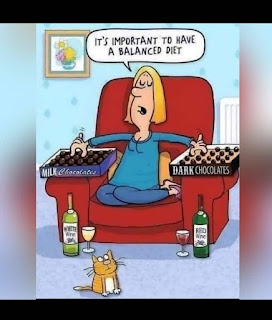 For the first half of the pandemic so far, I managed to maintain my weight at a healthy level and was well within the healthy BMI range. However, my birthday in November and Christmas in December saw a few pounds pile on as I binged on chocolates (bought as presents) and guzzled wine (to celebrate my big 7-0). I suddenly found I was half a stone heavier than I should be and doing up zips was a bit more of a challenge. More worryingly, a routine blood test revealed I was nudging the pre-diabetic range and my doctor advised me to enrol in a free set of gym sessions paid for by the good old National Health Service.

With the recent easing of lockdown, I had also been approached by my pilates teacher to see if I wanted to resume sessions with her, so since the beginning of September I now find I have two intense hour-long workouts each week - one for pilates and one on equipment in the gym. In addition to that, I have returned to volunteering at the local food bank serving food to the many customers who attend. It often involves lugging heavy crates each containing some 30 tins or more across the church hall. I reckon I'm getting more muscles than Popeye and ache in places I didn't know I had places. Still, the good news is that those extra pounds are coming off again and I can fit into my clothes again more comfortably. Just in time for my next birthday and Christmas!

I've just come back from a few days away from home - my first holiday in 18 months. I think Kay was feeling sorry for me and the fact that my days of going away anywhere are limited unless I do it on my own, so she offered to take me somewhere for a change of scene. We didn't want to travel too far, as we only had four days and didn't want to spend it travelling too far. I chose Thanet in Kent, as I don't know that area at all.

Thanet was once an island separated from the mainland by a channel of water, but it is no longer an island. It sits wholly on chalk and has the large towns of Margate, Broadstairs and Ramsgate on its shores. It probably gets its name from the Celtic word "teine" meaning bright or fire or bonfire and "arth" meaning height.  There may well have been bonfire or beacons were arranged along the coastline. The name "Tenet" was listed in the Domesday book of 1086.

Kay and I booked an airbnb flat in Ramsgate and made that our base. Our flat was at the top of a Georgian house in a crescent overlooking the seafront, so we had lovely views of the harbour and on a clear day (which it was for the most part) we could see France. 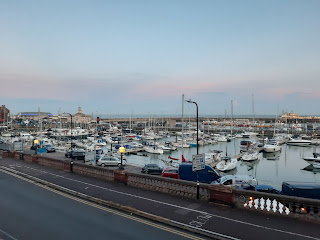 There wasn't a lot to see in Ramsgate itself although two things stood out for me.  One was this building right on the harbour front 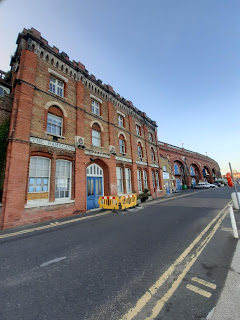 which is the Ramsgate Home for Smack boys founded in 1881. Apparently, it was built by a local vicar who saw the need for spiritual guidance and physical help for the boys, some as young as ten,  who made up the crews of the sailing smacks who fished out of Ramsgate in the nineteenth century. It was dangerous and arduous work, especially for the young apprentices who were called Smack Boys. When these boys were ashore, they were provided with rooms above the church and later in the Smack Boys Home next door.
Another Ramsgate sight worth visiting is the Ramsgate Tunnels. These were started between the two world wars, after Ramsgate was bombed in the First World War and many residents were killed. As the Second World War approached, it became clear the tunnels would need to be finished to act as an air-raid shelter for the citizens of the town.  Extensive tunnels stretching nearly three miles were dug underground through the chalk, some as deep as 80 feet, and with many entrances, so nobody was more than five minutes away from one. The tunnels were officially opened by the Duke of Kent just in time for the outbreak of war in 1939. 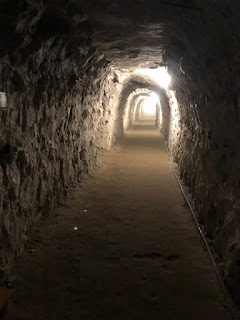 When an air-raid siren was heard, up to 60,000 could be given shelter down there until the all-clear siren was called. When some people found they had no home to return to, as it had been bombed, up to 300 families lived down there on a permanent basis. It was very claustrophobic even for the 90-minute tour, so goodness knows what it was like to live down there night after night during the bombing raids with so many people sharing chemical toilets! People who moan about living conditions these days have no idea. 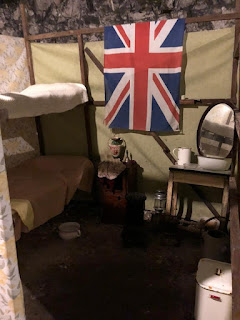 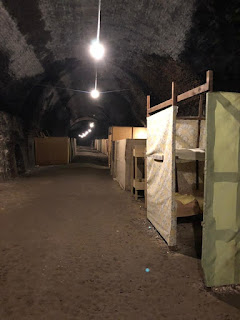 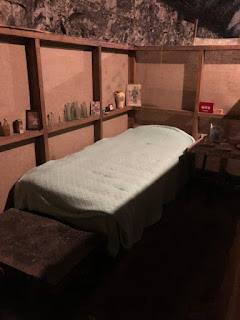 Kay and I managed a few trips to Whitstable, Deal and Sandwich as well as a 5-mile walk to Broadstairs and back over the clifftops. Sadly the Dickens museum was temporarily closed because of Covid, but we were able to see Bleak House from the outside.

All in all, it was a very pleasant few days and a wonderful change of scene for me, having been like a hermit for the last 18 months.  The weather played its part too and the sun shone brightly and warmly for us on three out of the four days. The strong sea air did us the power of good and we returned home ready to face whatever Covid can fling at us this winter.
Posted by ADDY at 09:44 1 comment: