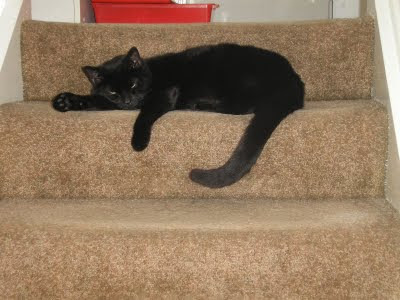 Who needs a bed, when the stairs will do? My cat is very strange. When she was a kitten, I bought her a proper cat bed. She refused to sleep in it. Instead, she has chosen to sleep all over the house in different places, changing location every few weeks or so, as the fancy takes her. Sometimes she can be found in a chair; sometimes under the coffee table; sometimes on my bed; sometimes on the guest bed; sometimes on top of a handbag or a pair of shoes (she has a real shoe fetish); sometimes in the corner of a room; or sometimes on the stairs. I suppose she gets fed up with the same old view, when she wakes up or nods off, so just changes her location for a different outlook. If she has not been in the habit of sleeping on the stairs for a while, it can be a rude shock to my system, when I go down the stairs in the dark and suddenly find a hairy body draped on one step (usually the one below the top step)! One of these days, it'll be MY body lying at the bottom of the stairs, because I haven't seen her in time!
Posted by ADDY at 10:38 16 comments: 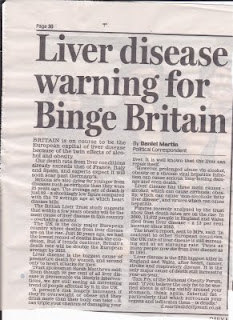 I don't know if anyone saw this story in the press last week, but it jumped out at me. A study by the British Liver Trust says that Britain is on course to be the European capital of liver disease because of the twin effects of alcohol and obesity. Our death rate from liver disease already exceeds that of France, Italy and Spain and will soon soar past Germany's. Britons are also dying a lot younger from liver diseases than they were 20 years ago, the average age being 59 compared with 79 from heart disease. Of course in my own experience, Greg died of liver disease and was 60, so no surprises there.


What is perhaps surprising is that the study suggests that obesity will be the main cause of liver disease in this country overtaking alcohol. Furthermore, we are the only major European country where deaths from liver disease are on the rise. Another statistic is that liver disease is the biggest cause of premature death for women and second only to heart attacks for men. A sobering thought (pardon the pun).

I am not a teetotaller. I enjoy the occasional drink as much as the next person, but I have never seen the sense in getting so hammered I am not in control of my actions or cannot remember what I did. I also enjoy my food but try to eat a balanced diet (no, not a bar of chocolate in each hand, silly) with the very occasional temptation of something oozing in pastry, sugar and cream. My Dad used to have a saying that all the best things in life were either illegal, immoral or fattening. True to a certain extent, but we owe it to ourselves to look after our bodies as best we can - life is not a rehearsal. I do so worry about what the young generation are doing to themselves (and of course the strain it will inevitably put on the NHS).


Thanks to our recent Labour government, the licensing laws were relaxed along the lines that if they can control their drinking in mainland Europe, then they can here. Sadly that has not been the case. Pubs now stay open a lot longer than ever before and young people barely out of nappies spill out of clubs and discos at 4 or 5 in the morning hardly able to stand, throwing up on the pavement or on some unsuspecting taxidriver's back seat. Alcohol can now be bought round the clock from supermarkets and petrol stations, as opposed to from off-licences which once upon a time used to only stay open for a few hours in the evening. Youngsters, determined to have a good time and get so plastered they cannot remember what they did the next day, will buy a bottle of spirits to drink at home before they go out, as it is cheaper than buying it once they are out at pubs and clubs. This new generation will graduate to supply the next lot of frightening statistics unless something is done to reverse the trend.

Thanks also to junk food, the post-war generation who sadly often have no idea what a vegetable looks like, are becoming exceedingly overweight. I only have to wander through my local shopping precinct to see bottoms as wide as barn doors (usually stuffed into too small leggings) and with various undulating rings of fat around their middles. The only exercise they get is moving their thumbs deftly over their mobile phone keypads. They often tend to push prams and drag small children behind them who themselves border on the size of miniature sumo wrestlers. Restaurant chains spring up in the high street based on American models with deep-fried salmonella and fries which seems to lure these youngsters in, as if hypnotised. I'm beginning to sound like a sad old crone (which I probably am) but it is worrying to think where it will all end. For all the bad publicity that alcohol and obesity gets, nobody seems to be doing anything productive about it except perhaps Jamie Oliver who at least is trying to make a stand and be a good role model......hopefully other leading celebrities and politicians will also see the light and do something positive to help arrest the trend.

Meanwhile Miss Goody Two-Shoes is off to make a salad and a glass of orange (Chateau Robinsons Low-Sugar) for her supper. Bye!
Posted by ADDY at 17:34 14 comments: 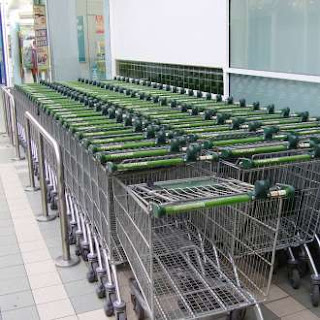 The rot has set in.........I had two most definite senior moments today and it's only lunchtime. OMG it's the slippery slope. I've turned sixty and morphed into a little old lady.

First I was at a garden centre and just returning my trolley to the trolley park, when an elderly man asked for my help. He had put a pound coin into the trolley to release it only to find he had put the coin into the wrong trolley (the one behind) and pulled out two joined together. I asked if he had another pound coin - I was going to suggest he insert this in the first trolley, separate the two trolleys and then return the second trolley. Just as he was looking to see if he had another coin, a woman walked past and threw over her shoulder " All you have to do is put both trolleys back, release the coin, then insert it in the first trolley." Derrr. Why didn't I think of that?

Second senior moment came when I called in at the supermarket on the way home. I loaded up the stuff onto the conveyor belt, packed and put the bags onto my supermarket trolley and then got into a complicated conversation with the cashier about school vouchers and how to reclaim some that had not been issued in the past. I then marched off with the trolley full of bags and was almost out of the door, when a very understanding store assistant caught up with me and reminded me I had not yet paid! Beetroot-faced doesn't describe it!