My late husband, Greg, wasn't a carpenter, although I suppose he had it in his genes - his grandfather was a carpenter in Northumberland and, in the Depression of the 1920s and 1930s, headed south looking for work. Greg subsequently inherited all his grandfather's tools and used to like nothing better than to potter around in his spare time, making sideboards, cupboards and bookshelves. I suppose it helped relax him, as his job was very stressful and required a lot of mental input, whereas tinkering around with wood allowed him to empty out. One of his projects was this natty little garden shed-cum-bench for our patio garden. 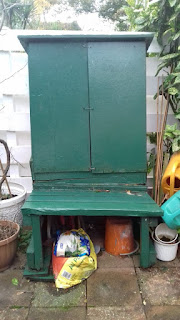 Our patio garden is too small for a conventional shed, so this fitted the bill. Small enough to look inconspicuous, large enough to house a few garden tools, some herbicides and sundry garden chemicals with a little bench to sit on as an added bonus. Greg made it a good 20 years ago, long before alcohol became a more attractive hobby for him. 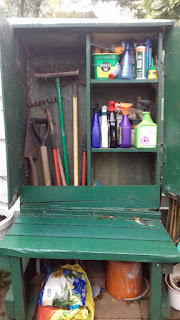 However, over the intervening years,  it has fallen into disrepair, as a closer inspection of the above photo shows. I have tried to get it to limp along with the aid of filler and duct-tape,  every time bits of wood fell off. I have painted it several times to keep it looking dapper. But finally it has given up the ghost and, if it weren't for the fence behind it, it would have keeled over and crashed into a thousand pieces.

Ever keen to keep Greg's little shed with us, I recently hired a carpenter to completely replicate it. Observing lockdown rules, he would access the patio garden via a side alley without coming through my house.  I had taken great pains to watch the weather forecasts and we agreed on a date right in the middle of a very dry spell as we did not want the wood to get wet while it was being made or while it was being painted. Unfortunately, he let me down twice and made lame excuses each time the night before he was due.  It was irritating because he was not doing his normal self-employed work because of lockdown and was home all the time, so his excuses were a bit feeble, particularly as he let me down each time at midnight the night before he was due, on one occasion saying he had to take his son somewhere.  Considering I was giving him some much-needed money and he was going to work outdoors, so no risk of contagion, it was a bit much.

He finally told me he was coming to do the job on the Sunday before last - the wettest week of the summer so far - and it took all of four hours to make it. For the money he charged I was expecting a whole day's labour or a shed the size of a bungalow!

Anyway, this was how the carpenter left it.

I had offered to paint it, as I enjoy painting, but because of the delay in getting the shed made, I was then faced with painting it in the worst of the weather. The days following consisted of wall-to wall rain or showers at unexpected times of the day and quite at variance with the forecasts. Trying to nip out between showers and prime it, undercoat it and topcoat it, allowing the required eight hours for each coat to dry, was a nightmare. I had to keep covering the shed with an old shower curtain and polythene to protect it, as I did not want to paint over wet wood or get rain on the paint. There were heavy winds too blowing all sorts of tree seeds and grit all over the wet paint.

I shed a tear (see what I did there?) to see the old one go, but Greg's shed lives on, albeit a complete reincarnation. After what seemed an eternity in getting it built and painted, the new shed now finally looks like this....