My head is buzzing with all the photos (600 of them!!) and stories Kay has been regaling us with since her return from Central America. She has had a whale of a time and experienced such things she will remember for a lifetime. All those weeks of worry (on my part) have dissolved with every precious minute I have her back with me. It turns out she was the only Spanish-speaker in the group of eighteen and was pushed forward at every turn to speak for the group, arrange transport to collect them or negotiate accommodation in advance and haggle down the prices. Her Spanish went from rusty GCSE standard (done a year ago and forgotten ever since) to passable conversation standard within a few days and rose to very good within the space of the four weeks. She also taught the odd phrase to all the others to help them with what they needed to buy their souvenirs or order a drink. But she was always the one to order the bulk food in the brightly-coloured markets , to converse with the guides they took on, or to haggle the prices. 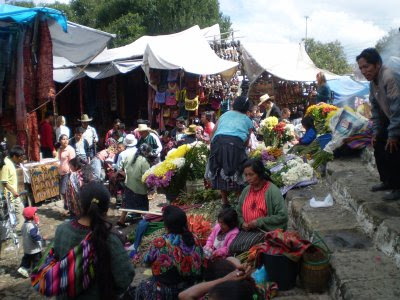 She has so many stories that it is impossible to put them all here. One is of the mountain trek overlooking Lake Atitlan. The paths were steep, shoulder-width and covered with crumbling rock. The descents were the worst. Carrying extremely heavy rucksacks, with their homes on their backs, the girls had to negotiate the steep crumbly paths with sheer drops to one side and the danger of more falling crumbling rock to the other side. The views of the lake and surrounding volcanoes more than made up for it though, as her photos bear witness. By the way, you can click on any of the pictures to enlarge them. 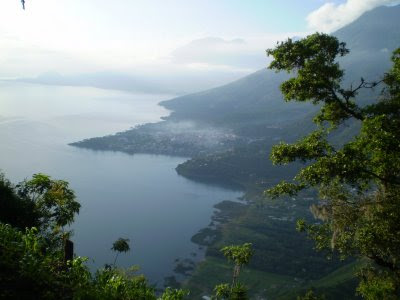 Another story is about the climb of the Pacaya Volcano. It had erupted two 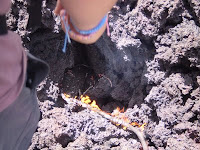 days before they got there, spilling molten lava over the sides, then it rained the next day, cooling the lava. On the day they climbed, the lava was still cool but now and then in the cracks and fissures, they could see burning red-hot fire. Some passing Americans on their way down gave them some marshmallows and a stick to toast them. Their delight in being able to do that was palpable. The following day in a nearby hot-spring they swam in sulphur-enriched waters which turned any white on their swimsuits yellow.

Another lovely part of the trip was the community project. They stayed on a reserve on the Pacific coast for a week, lived with the villagers and helped with turtle conservation. Apparently the turtles there are in danger of extinction and have their eggs poached by those who believe they are an aphrodisiac. The community scan the beach for any signs of eggs and put them in a hatchery where the baby turtles can hatch in safety and then waddle back down to the sea to start life all over again. The beaches also need to be kept clean from debris to allow the mother turtles a safe path ashore to lay their eggs, so the English girls helped with that too. In exchange (to put something back into the community) the girls paid for lessons on how to make knotted-rope hammocks or brightly-coloured string bracelets. 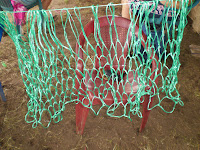 Kay's hammock in progress
Or they played with the children.... black-haired, dusky-faced cherubs with toothy grins who were eager to learn the English games the girls taught them. The girls also arranged a Sports Day for the children to which the whole village turned up. It was sad saying goodbye to their newly-made friends. (Incidentally, Kay says that many people in Guatemala believe that the tourists come to steal their children. There may be an element of truth in that, as some cute children have been kidnapped to order for childless tourist couples. So out of respect for them , you are sadly denied those lovely pictures.)

Now the photos are being stored and the stories written up. What memories she will have to look back on in years to come. Her AS results, by he way, waiting for her return, were excellent and a good foundation for the finals next summer, but it will no doubt be another stressful year ahead, full of hard work and distractions, courtesy of Greg. But meanwhile she has another week to unwind and to dream of those far-away places. And me? I'm just so glad to have her back.
Posted by ADDY at 10:28 11 comments:

A sigh of relief

Kay's home again - safe and well and looking great - even despite being awake 24 hours during her return journey and jet-lagged. She seems older and wiser, more confident and more beautiful. A slight hint of a tan and 76 insect bites!! She chatted non-stop to me and her grandmother about her experiences and we had to give up at about day 5 of her trip, as she was so sleepy. Once refreshed after a few hours' sleep, she went off for a much longed-for shower and a change of clothes (decent clothes as opposed to the three sets of trekking clothes which had been on constant rotation over the last 32 days!!)

The new washing machine, meanwhile, is working flat out and churning round the Guatemalan/Mexican soil in its drum. Clean clothes are coming out the other end and I am in seventh heaven. Normality is slowly returning to the Alcoholic Daze household. Well, as normal as it gets, anyhow.

A clean start - in more ways than one.

I'm back from my break - refreshed and revived, ready to fight the fray. I had a wonderful time with my mother. We chatted non-stop, while we emptied out bulging cupboards, hacked back rampant undergrowth in her garden, washed net curtains and cleaned windows. We went for gentle walks (she hardly ever leaves the house otherwise) or went out for trips in the car. I have brought her back with me for a little holiday in the metropolis. She will also be here with me when Kay returns from her adventures at the weekend. There will be so many stories to hear then.

On that subject I cannot believe a whole month has nearly gone by since I last saw Kay. When I got home, I discovered two emails from her sent over the last two weeks telling me what she has been doing and of her adventures. It was a welcome relief as I had been worrying terribly, as some of you already know. My fears were made worse by the story in the press last week about a group of boys from Tunbridge Wells who were in Guatemala on the same sort of expedition with the same organisation and were attacked by armed bandits. Kay was due to take the same route as these boys a few days later, so I was truly alarmed and could not settle. Her emails therefore buoyed me up. I am counting the days till her safe return.


To thank me for not being in use these past few weeks, my trusty washing machine decided to give up the ghost and the drum would not turn at all either to rotate the clothes while they wash, or to spin them at the end. I suspect the washing machine decided to go on strike before Kay throws muddy trousers and mosquito-splatted tops in its direction, when she gets home. It is hardly worth the call-out charge to get someone to look at it, as I know they will write it off. It has served its time over many many years, anyway. So my priority has been to find a replacement as quickly as possible. These days there are so many to choose from..... from the basic switch on/ switch off, to ones with control panels that look like an aeroplane cockpit! I have spent the last few days sticking my head inside the drums, twiddling the knobs and making up my mind about whether there's a bargain to be had. I wonder if they take empty whisky bottles in part exchange? I am lining up the laundry in anticipation of its arrival, hence the "clean start" to my title.
To those who asked me in my last post why I bought enough whisky for Greg to last during my absence and why I did not leave him to make his own choices, my answer is simple. If I did not supply Greg with whisky, he would certainly go out and get it himself. However, that would mean him getting into his car and driving about half a mile or so either eastwards to an off-licence or westwards to a supermarket. Bear in mind, on most days he can barely stand, let alone walk or drive a car. If he killed himself whilst driving under the influence, I accept he would have only himself to blame, but I could not have it on my conscience, if he killed someone else in the process. I have tried to confiscate his car keys so many times in the past and it has led to even more conflict between us and subterfuge on his part to steal my set of keys from wherever I try to hide them. He cannot walk the distance to the various outlets, because he gets severe pains in his legs (a side effect of the smoking and heart disease). To leave him without alcohol altogether is not an option as the withdrawal symptoms would be too dangerous... hallucinations, convulsions and coma being the worst. So I figure that buying him the supplies is the best option all round until he can either reduce his consumption or kill himself. Whichever comes first.

Greg did not look at all well on my return. He had not eaten ANY of the food I had prepared for him or the ready meals left in the freezer. He had basically existed on a diet of whisky and virtually nothing else, apart from the occasional can of soup. He looks very thin, can barely walk and needs my help to stand up from the sofa. We have an appointment with the GP this afternoon who has asked him to come in for the results of some blood tests done a few weeks ago. I fear the results will not be good.
Posted by ADDY at 10:43 14 comments: