I had to pop into Central London this morning for a hospital test booked weeks ago. I sure know how to pick my days. It would be the morning after the worst snowfall in London for years. Public transport up the creek and I had to be there by 10.30 am. Worse still, I  hadn't been allowed to eat since yesterday lunchtime. I was so weak and so hungry I could have eaten my head. I had to negotiate the snowy pavements in freezing cold temperatures, hang around for delayed trains and then buses. Fortunately I made the appointment on time. As I was leaving it decided to snow in blizzard proportions.  I stupidly thought I'd snap a stunning photo of Westminster in a blizzard from inside the bus,  but there was total white-out until my bus got over Lambeth Bridge and I was able to take this rather pathetic photo instead. Ironically the nurse that put a cannula into my arm was from Russia. She thought it hilarious that so little snow could bring a capital city down to a standstill. She's used to far more dramatic stuff. 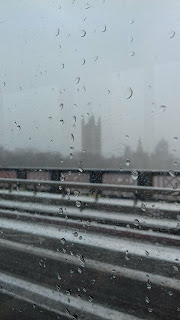 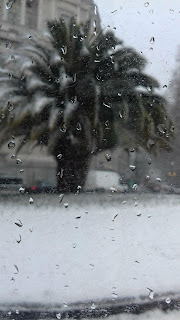 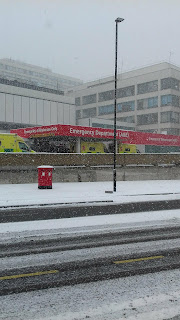 You might have noticed I've been a bit quiet of late. And then again, maybe you haven't. I've been busy. Very busy. And a bit stressed with it. I've just come up for air, before diving back under again.

Clearing away a person's life can be arduous, depending on the person, I suppose. I wouldn't describe my mother as a hoarder, far from it, but she knew how to fill a one-bedroom apartment with a lot of stuff which now falls to me to dispose of. To be fair, until four years ago she had a four-bedroom house with large garden and had to compress all of that into a one bedroom retirement apartment, when she moved closer to me.  She tried to hang on to as much as she could during the move, the consequence being that a lot was shoved into cupboards, wardrobes, under the bed and any space she could find to house it all. I have been painstakingly going through it all over the last six weeks or so, as I have written about before.

Personal items were divided into keep, throw away or donate to charity. The same applied to furniture. With the best will in the world, I just cannot keep much of mum's furniture - my own house groans with enough as it is and, moreover,  I plan to downsize myself at some point when I get too frail to manage a 6-storey house on my own. So I approached a charity to donate most of the items to them. It's all good quality stuff but "vintage",  or antique even, as my mother was old school and hung on to things all her life and looked after them. However, herein hangs the tale - some of the soft furnishings do not have the up-to-date fire regulation labels so the charities are not able to accept them. They rejected a perfectly good double bed with four drawers underneath, an excellent two-seater sofa-bed, two plush armchairs the size of Narnia and 4 tapestry dining chairs. No fire regulation labels of any kind, you see, let alone up-to-date ones.

My headache began to form. How to get rid of it all? Bearing in mind, I am 67 years of age, widowed and with no muscly men (indeed no men at all)  in the family  to assist me, I approached the local council, as they advertise bulk refuse collections from home. For a cost of anything between £20 and £30 per item they would collect them for me. But (there's always a but) I had to put them on the kerbside for them to collect. Mum's flat is on the first floor and there's only a minuscule lift in the block. If four people stand in the lift at the same time, they get to know one another intimately. The only option is to take it down a flight of fifteen stairs. Picture how I might single-handedly get a double bed from the first floor to the kerbside. Let alone an armchair or two the size of Narnia. Everyone else in the block is elderly - it's a retirement settlement - so no help to be had there. When I put this to the man at the council, his reply was "well, we can't help you, then".

In desperation I turned to the internet and googled house clearance firms. There was a local one so I approached them. To remove five items of furniture and dispose of it on the local council dump, they quoted me £425 plus VAT. That works out at £100 an item - to throw it away! Needless to say, I told them where to go (and it wasn't exactly to the council dump). The old adage, where there's muck, there's brass springs to mind. Not that it's muck. It's all good stuff.  I've had a few sleepless nights since, chewing it over and over in my head, but have now come up with a plan. With a man. And a van. He's quoted me £200 and that includes removal of a few bits of furniture back to my house as well.  Problem sorted.
Posted by ADDY at 15:33 5 comments:

Last Thursday saw Kay and me carrying out my mother's wishes. She and my father were in love all their married life and joined at the hip, so, when my father died in 2001, my mother was hopelessly lost without him. Not a day went by since, when she didn't yearn for him to be still alive and with her. I promised her that, when the time came, her ashes would lie alongside his. Last week, Kay and I took my mother's ashes down to the crematorium on the south coast and did just that. It was emotional to see the very last remains of my mother go, but at the same time uplifting that she and my father were at last reunited after seventeen years to the very day since my father died.

While we were down on the south coast, Kay and I took the opportunity to have a few days' break - a much needed one for me, as the last six months had been horrendous and unrelenting. We booked into a lovely hotel on the seafront. Our room had two balconies and had views of the pier in one direction and Beachy Head in the other. 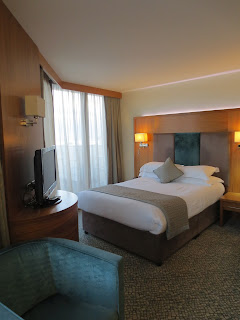 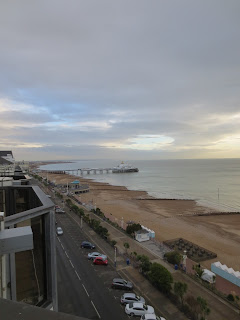 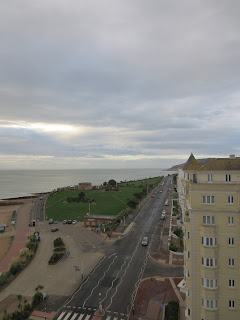 On our second day there, Beachy Head beckoned and we walked six miles in blustery icy wind up and down the undulating chalk hills, 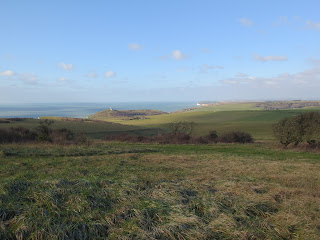 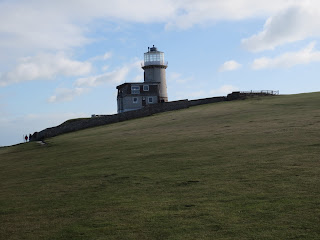 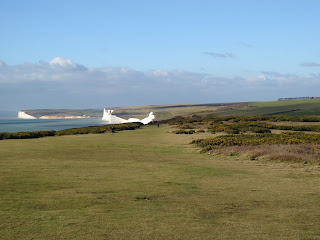 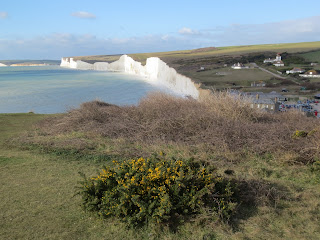 Just to the centre right of the last picture you can see a grey-roof building at Birling Gap, just before the start of the Seven Sisters,  where we stopped for a welcoming cheese scone and hot chocolate, before walking back the way we had come.  When we got back to the hotel, Kay's face was sore with windburn and I couldn't feel my hands, but I think it did us good to blow away some cobwebs.

The next day the rain was non-stop, so we dived into the shopping precinct and had a shopathon. Far too much was spent on things we didn't really need but had to have! The evenings were spent trying out the local authentic Italian and Thai restaurants. It was just what I needed. We made one last stop on the fourth day to say a wistful goodbye to my mother (and father) again, before heading back to London.

I'm now back to clearing my mother's flat again and trying to find a home for it all - be it with charity shops or in my house. I think I already need another holiday...........