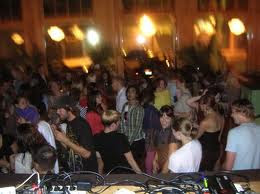 Photo courtesy of emynd and bo bliz
"Out Clubbing" has taken on a whole new meaning. Kay has just contacted me to say she was out last night celebrating a friend's 21st birthday at a club. At one stage she looked down at her handbag slung over her shoulder and saw it was slightly open. Initially, she thought she might have not have shut it properly when she paid for drinks. It was only much later that she discovered she and two of her companions had been robbed of their mobile phones. The club was full to bursting so people were bumping into one another all the time... an ideal situation for the pickpockets. Not only that, but when she rang the mobile company today to alert them and freeze her account, she discovered £28-worth of international calls had been made shortly after it had been stolen. She has now reported the theft to the police and is on her way out to buy a new one, after all, someone who has used the phone to make international calls is hardly likely to hand it in. What a vile world we live in.
Posted by ADDY at 16:36 14 comments:

A World Health Organisation report issued today (see here) states that 1 in 15 men in the UK is an alcoholic. That's a pretty high number. Given there are about 29 million men in the UK that means there are about 1.9 million alcoholic men in the UK, not to mention women. Given too that about half of those will have absolutely no community conscience and will drink/drive to get more alcohol, that is about a million drunk drivers on the road. This can be at any time of day, after all the true alcoholic will need to get that fix as soon as he wakes , so will drive with alcohol still in his bloodstream from the day before. But of course the number of drunks on the roads will get progressively worse during the course of the day and evening. Greg always used to insist that he was a better driver drunk than most people were sober. Yeah, right. That's why he had scratches and dents at every corner of his car. That is why, towards the end, I got his supplies, as I did not want someone's death on my conscience.

Mind how you drive. You never know how many of them at any given moment will be driving in front of you, behind you or towards you!

******************************
The report also says that 4% of all deaths worldwide are attributed to alcohol, greater than deaths caused by HIV/Aids, tuberculosis or violence. When you consider what efforts have been spent on trying to eradicate Aids and TB, it is amazing how little is being done to stop the march of alcoholism.
Posted by ADDY at 09:51 12 comments:

This will be my first without Greg, but for all those love-struck couples out there, here is a little cartoon to warm your heart.


Based on the book "Love Monkey" by Edward Monkton
Posted by ADDY at 09:04 2 comments:

The worst day of my life 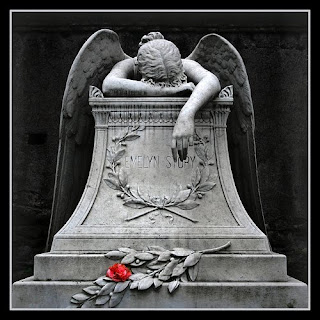 Angel of Grief (courtesy of Valerio Sibio on flickr.com)

The day my father died - ten years ago to this very day - was arguably the worst day of my life. I remember it well and it certainly does not seem as long ago as ten years.
His death was a wrench in more ways than one. He and I were always very close. He was proud of me and I of him. As the only child, I always wanted to protect him, as he had suffered so much as a child and young man, as I wrote about here. We never argued about things and he meant the world to me.


While I was on my honeymoon with Greg in 1976, my father had a heart attack and I only found out when I got back home again. Greg and I were leaving England to start our married life in Germany and I had to leave my father in hospital, not knowing whether he would live or die. He survived but I spent many a restless night in Germany wondering whether I would get a phone call with bad news. Amazingly, he went on to live another twenty-five years and it was not his heart that eventually let him down in the end. He developed leukaemia about three years or so before he died and although that type (chronic lymphatic leukaemia) was not a killer, he went on a few years down the line to develop a second type which was aggressive (acute myeloid leukaemia). Up to that point I had no idea that there were so many types of leukaemia and that some were more dangerous than others. I remember well when the AML was first diagnosed. It was mid January 2001. My father had been feeling seriously unwell for a few weeks and the consultant haematologist was puzzled and decided to run some more tests. The news was not good. Not only had he now got a second type of leukaemia (it was rare to get two kinds) but it was fatal and he only had weeks or at most a few months to live.


As if this was not bad enough, I was faced with a major dilemma. Not only was I about to lose my beloved father but I had to have a hysterectomy and I was unhappy about the timing. I had a huge mass growing inside of me making me look slightly pregnant. My gynaecologist was pressing me to have an urgent operation as he was fairly confident the tumour was benign, but could not rule out the small chance it might not be, until he had cut me open. Also, because of its rapidly growing size, he did not want to delay. I was booked in to have the operation on 2 February 2001. A few days before, I visited my father sixty miles away, who had meanwhile been admitted to his local hospital for blood transfusions and general care as he was very weak. The prognosis was now that he was fading fast and would probably not live beyond a few weeks. Still my gynaecologist was pressing me to get my operation done as soon as possible, as time was of the essence for me too. Friends and relatives were urging me to see sense and not to delay my operation in favour of my father. Reluctantly I agreed to go ahead with my operation and then, with that at least behind me, concentrate on helping my dad through his last weeks.

On 1 February 2001, the day before my operation, I was at home packing my case and counting down to 6pm, the time when I was supposed to report to the gynaecological ward. At lunchtime, I was just about to run a bath when I received a very tearful call from my mother telling me that my father had just passed away. I was absolutely devastated: the most wonderful man in my life had gone. The last thing I wanted to do was proceed with my operation and I rang my gynaecologist to tell him I was cancelling. He said he could not force me to go ahead but he urged me to think about myself as there was nothing more I could do to save my father and there was still that slight doubt that I could have a cancerous tumour. I asked him to let me have more time to consider. By now friends and relatives were ringing me, as they too had heard the news about my father. When they heard that I might be cancelling my operation, they were horrified and begged me to reconsider. Greg pleaded with me to put myself first now. The rest of that day passed in a blur. All I remember is later that evening lying in an old Victorian-built ward of about 20 beds at about 8pm, as Greg kissed me goodnight and left for home again. I recall being in the midst of a busy, noisy ward full of people, yet I felt so alone and wretched. I was about to have my insides ripped out, but my heart was already crushed to a pulp.

Thankfully the operation on the next morning revealed that my tumour was indeed benign (a fibroid) although an extremely large one the size of a rugby ball. I lost half a stone in weight overnight! Two weeks later, clutching my stitches, I was able to cope with the sixty mile journey to my father's funeral. It was arguably the worst month of my life, even compared to the hand life was to deal me later.
Posted by ADDY at 12:40 16 comments: