I've just returned from a few days with my mother again, this time to attend a funeral. It seems to be, as you get older, that funerals are more frequent than ever before, as gradually your circle of family and friends gets smaller.

This time, however, the death was the least expected. It was my mother's cousin who had been more like a sister to my mum than a cousin. They telephoned one another at least once a week and occasionally the cousin visited my mother and took her out to lunch somewhere. They had been chatting on the phone only the day before she died and been out to lunch together only a fortnight before. The cousin had not been seriously ill and had only gone down with a mere cold a few days before. It is true to say she was painfully thin (and we often suspected she was verging on the anorexic), so maybe this did not help her general health. On Good Friday afternoon, she had gone out shopping with her husband, but was feeling unwell with the cold and went to bed early on Good Friday evening. The next morning at 5am, her husband discovered her lifeless body beside him. The post-mortem revealed she had died of broncho-pneumonia. Her sister rang me a few hours later to break the news to me and it was the hardest news to take in. Even now, none of us can really believe it. She was 71. For her it was the best way to go - to go to sleep and not wake up, but for her husband, sons, grandchildren and wider family, it just doesn't seem possible.  The funeral was held last Friday in sunny Hastings. The weirdest thing was eating a piece of Simnel cake at the funeral reception that she herself had made for Easter.

Always tell your loved ones you love them: you never know what the next day may (or may not) bring.
Posted by ADDY at 09:46 11 comments:

Is it just me or do you need a PhD to buy a lightbulb these days?

I had recently looked in my garage cupboard where I keep the spare lightbulbs to discover I was right out of bayonet fitting/common-or-garden lightbulbs to replace the one in the hall ceiling light that had just died. When I subsequently did my supermarket shop, I browsed the shelves for a replacement. Now this was an ordinary supermarket, not a specialist shop, and yet there were so many to chose from, my eyes started to glaze over. Another (significantly younger woman) was on all fours combing the bottom shelf for signs of bulbs that looked remotely like she needed and we both ended up becoming lifetime buddies in our unity against the plethora of choice. Having discarded the options of spot bulbs, candle bulbs, halogen bulbs, with even further variations of bayonet fittings, screw fittings and small screw fittings, I was then faced with even more choices of environmentally-correct ones that promise to give out as much light as required without flogging the poor little dears to death and without running up an electricity bill that would make Greece's debt look tame. However my experience of these super-dooper eco-lightbulbs with vast claims to save the planet are that they take about half an hour to warm up, by which time I have given up and gone to bed! Or tripped over the cat in the gloom.

I finally found something that looked like a pig-normal lightbulb and had a bayonet fitting, but it showed two wattage amounts of 43 or 55 and I was looking for a 60W bulb. Hell, when was buying a lightbulb so complicated?
Posted by ADDY at 16:48 11 comments:

Thank you for all your useful comments on my last post. It was pretty clear that you thought availability was not the best solution to the problem of alcoholism. It is such a complex problem and the reasons that lead someone to drink in excess are varied and complicated just as are the things that make someone more prone to depression. In fact I consider alcoholism to be a form of depression and, once sucked in and under, it is very difficult to emerge intact again.

Certainly on the practical side, I would like to see three main prongs of attack to deal with the surge of binge drinking and alcohol dependency.


In addition to all that, we still need the medical profession to understand alcoholism better, as my experience with Greg was that, like a hot potato, they could not wait to get him out of the building and off their hands. There was little money for rehab or detox and so there were too many waiting too long in the queue (usually at least a year) to get into a rehab programme, by which time, the person was too ill to be admitted or dead. Given the numbers turning to alcohol on a large scale nowadays, we could do with far more approachable counsellors or GPs trained to deal with alcoholism in their area, so that they can advise alcoholics and their families how to cope/go about solving the problem. I always found there was relatively nowhere to turn to that could offer real help. If it's like that in a big city like London, then how much more of a problem is it anywhere else?

As I said, it's a complex issue and needs far more thought and money thrown at it, more than little me can suggest, if we are to overcome the enormous problems that loom on the horizon. I do hope Ministers and professionals are working hard at it, or else I dread to think what the future holds.

Meanwhile, on a more cheerful note, Kay is home from uni for two weeks' Easter holiday and it is fantastic having her company again. To coincide with Kay's arrival, the cat has picked up some sort of skin allergy on her ears, with tufts of fur falling out so she looks very odd with two bald ears either side of the furry crown of her head (not a little dissimilar from Dobbie in Harry Potter). A visit to the vet yeterday left me £48 poorer but at least with a diagnosis and some oily antibiotic medication to smear on her ears. Here she is in her latest choice of resting place of the month - my desk! 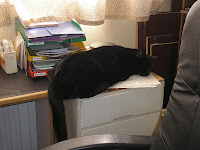 We're off soon to visit my mum for a few days, so a Happy Easter in the meantime and don't eat too much chocolate, although I can't see Kay and me sticking to that!
Posted by ADDY at 15:30 10 comments: