A Picture Paints a Thousand Words

I've been busy the last few weeks - too busy to blog and read other's blogs. The reason? Because I have been decorating a room that hasn't seen paint or tender-loving care for over twenty-five years. One of  our smaller bedrooms is grandiosely called The Study, because that is what it is. It's a workroom with desk , filing cabinet and 6 ceiling to floor bookcases that line the room. It once boasted two his-and-hers desks, but I have long since dismantled one of them and put a sofa bed in its place which can double as a bedroom if need be.
The reason it has not been decorated in over twenty years is quite simple. In my six-storey house with only one room on each storey, it is impossible to move furniture from a room without moving it up or down a flight of stairs, which, for me on my own, is nigh on impossible. It means furniture has to stay in a room if it is being decorated, but when the room is lined with bookcases crammed with books and paraphernalia, it is virtually impossible.
Or so I thought. I had been planning to decorate the house starting with the very top and moving down. To this end, I have hired a painter to start in the New Year, as one room needs replastering and quite outside my skill set, but I knew  (and he confirmed) that painting the study would be a logistical nightmare. I sat on the idea for a while but one day I had a good hard look at the logistics and worked out a way to do it all myself. This is the reason I have been absent for so long -as it took a good while to accomplish single-handedly and I can say with some real satisfaction that I am cream-crackered.
First, I covered everything with dust sheets and painted the ceiling. That was by far the easy bit, although I hate painting ceilings with a passion, especially now I seem to have arthritis in my neck. Then came the difficult bit. I had to pack up all the books and items on two bookcases, find room to store them in another room  on another level a staircase away. I then dragged (with difficulty) the two bookcases away from the wall into the middle of the room, painted the wall and skirting behind them, dragged the bookcases back into position the following day and reloaded the shelves with the books and items. I then moved on to another two bookcases and so on over the course of a week until the wall behind all six bookcases had been painted. I then moved on to the other two walls in the corner of which is a huge L-shape desk built by Greg and which is attached to the floor. I dismantled that and painted the walls in a very vibrant peacock blue which matches some material I am going to make a roman blind out of. I ordered a large rug to cover a very sad looking carpet that cannot be replaced because of the same logistical problems of doing it with all the bookcases in the room.
Except for the blind, which I shall make in the next few weeks, I have now finally finished and am chuffed with the result. I have never known The Study looking so good and it smells so fresh too. 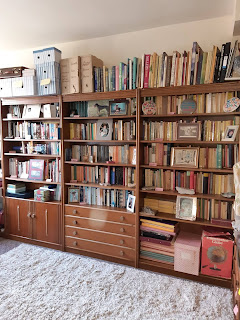 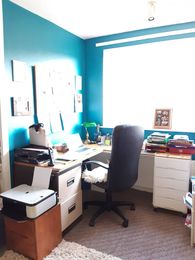