The weather here has recently been incredibly mild for March and today I was even able to walk around without a coat or even a cardigan. It was a lovely sunny day with clear blue skies. I suspect the weather patterns are still coming from the South. Last week, we had a fine dusting of Saharan sand over our cars and garden furniture. My window-cleaner came today and said it had made his job twice as long, as he kept having to change the water.

The fine weather has made me want to get out more and walk to do errands rather than drive.  Today I passed a sight that is a mere 50 yards from where I live and always makes me smile. It is a beacon of hope, amid the awful news coming from Ukraine, that there is basically good in the human race and good will eventually triumph over evil.

Someone along my road (let's call him Kevin) has taken it upon himself to plant a beautiful display on the common verge. Let me set the scene. This is what you see as you walk along my road. 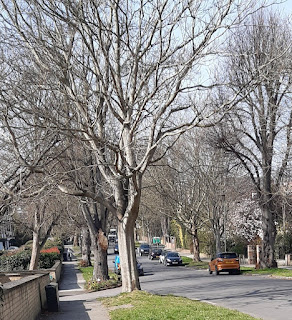 If you home in on the second tree furthest from you (beside a turquoise car) you will see plants around the tree. I have blogged about this before and it has been like this for quite a few years. I half-expected some jobsworth at the council to condemn it as being a health risk or something stupid, but it has remained and cheered up passers-by no end.

Unfortunately, during Storm Eunice a few weeks ago, branches of the tree came crashing down and fell beside the little impromptu garden. Council workers removed the branches from the road, but cut them up and  heartlessly dumped them on the flowerbeds until lorries could take them away. You can see the big scar on the tree where the branch once was. 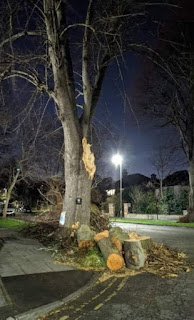 Kevin was heartbroken about the way his good work had been trashed and put out an appeal on our local Facebook group for donations to fix it. I and many others contributed to his appeal and he raised a fair bit of money. This was the first thing to warm my heart that people appreciated what Kevin has been doing.  Kevin thanked us all personally via Facebook for our donations and he promised to get the site back up to its former glory.

Today, as I walked past Kevin had obviously been busy, for this is what I saw 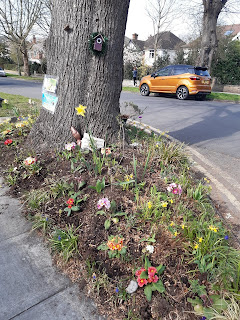 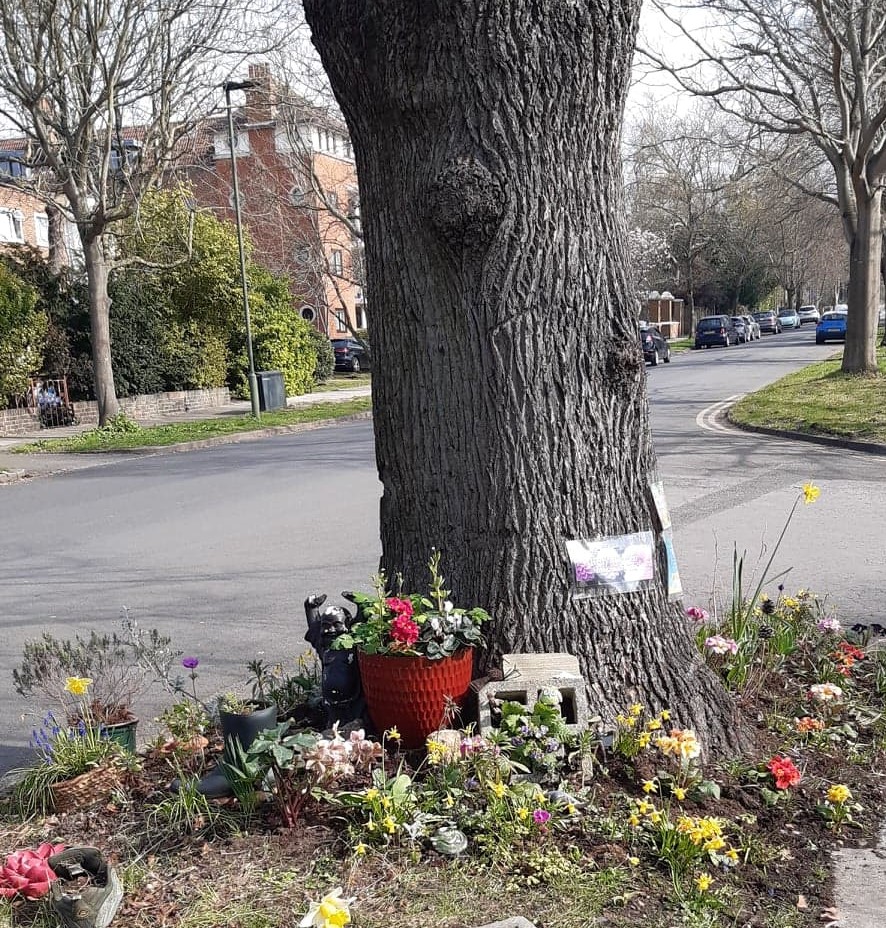 He has even planted a little herb garden and invited passers-by to help themselves. 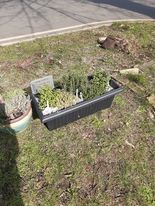 It really cheers me up every time I pass it and reassures me that there are more kind people in the world than there are Putins.

My  sore thumb has continued to cause problems all week - it is difficult doing things one-handed, particularly doing up waistband buttons and washing up (I'm not supposed to get the steri-strips wet). You never realise how important a digit is, until you can't use it, particularly an opposing thumb. Hopefully the bandaging can come off today and I can inspect the wound. I have not used the car this  last week, as I did not want to cause an accident - grasping the gearstick with a gammy left hand was not so simple. Thank goodness for true friends who have ferried me about to choir sessions this week.

It's all small fry though, when considering what the poor people in Ukraine are going through.   The West stands paralysed while Putin tells lies as an excuse to perform even more uncivilised atrocities in "retaliation" (or so he explains it in his callous mind), including threatening the West with nuclear deterrents, bombing hospitals, schools and ordinary civilians' homes.

I watched an interesting series on BBC2 about Hitler's war with Stalin (see here). It echoed many of the tactics used by Putin now and may explain what is going on in Putin's mind. I wish I knew how to copy the bit of the video here, but at 56 minutes 57 seconds on the second episode there is man talking about dictators in general and it sums up Putin to a T.

However, I cannot believe that in 2022, some 80 years after the last World War, mankind has not learned a lesson - that war is futile and deliberate war crimes will not go unpunished.  My heart goes out to the Ukrainian people and I can only hope this terrible mess will be resolved quickly before more lives are lost and damage done.

Kay and Darcy visited me for the weekend to celebrate their engagement officially. We went out on Saturday evening locally for a lovely Italian meal. They certainly make an attractive couple and I am so happy for them. It takes me back to when Greg and I were young and the world lay at our feet, full of excitement and we had lots of plans for the future.

The following day we laid flowers at the crematorium as it was the 12th anniversary since Greg died. We looked at his entry in the Book of Remembrance and "told" him about the engagement, "introduced" Darcy to him and "spoke" of the awful events unravelling in the Ukraine (Greg used to work for the BBC World Service newsroom, so, had he been still alive, this awful story would have  preoccupied him at work). It was a tearful visit for us all - even Darcy who would have loved to meet Greg.

Afterwards, I was preparing lunch for us all and managed to slice a huge wedge into my thumb pad instead of an onion. It bled profusely down my thumb, hand and arm and took at least 20 minutes of gripping it tighty to stop the bleeding enough to apply a plaster. It continued to throb all afternoon until Kay took me to the local urgent care centre for it to be examined. Fortunately it didn't require stitches but they put steri-strips on it and bandaged it up again tightly, as it was still bleeding profusely. I have been told to keep the bandage dry and clean for seven days before I even attempt to remove it -  even then it won't have healed entirely. I was planning to do a lot of spring gardening this week as the weather was dry (for a change). It looks like that is not possible now, as well as several gym visits I had planned.