It would have been Greg's 61st birthday this week. I did not fancy the prospect of spending the day agonising over what might have been and, as one of my two close friends is holidaying in Cuba and the other is otherwise engaged taking her mother to a hospital appointment, I decided to distract myself by visiting my mother for a week, as it is high time I got on with her gardening and other chores. All this early hot weather we have been enjoying has made the plants and shrubs go berserk. Mine are doing this at the moment....... 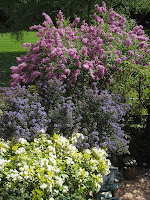 The weather has been glorious this last couple of weeks and has lifted my spirits; so too has a steady stream of people visiting me. Apart from the ex-neighbours who came the previous weekend, I had a surprise visitor midweek from a friend whose son used to play with Kay when she was about 3 to 7. They would run around the garden, playing in fancy dress or slide down slides or swing or swings. Now Kay is training to be a doctor and he is a promising rockstar with waist-length hair and a bandana. I can remember him singing his heart out at the kindergarten nativity play! How the years roll by. Yesterday my best friend (the one who is not in Cuba) and her husband came to see me. We had a marvellous day together and I was sorry to wave them off again. I'm off now for a week to visit my mum, so until then...............
Posted by ADDY at 13:48 14 comments:

Many thanks for all your supportive comments over the last few weeks. They have buoyed me up and kept me going. I am in a strange transition at the moment. For the first time since Greg died six weeks ago, I am officially on my own; alone; widow of this parish; a singleton, for Kay went back to university up North this morning. I took her and her three cases of clothes, work, more clothes, laptop and more clothes to the station and put her on the Inter-City train. We decided to get a taxi across London to avoid having to lug the heavy cases up and down into the Underground. The taxi driver took us along the scenic route in today's glorious spring sunshine - past Buckingham Palace just as they were Changing the Guard;

past the various theatres, pubs and specialist bookshops in Charing Cross Road ;

into Bloomsbury and past the British Museum.

There's no better place than London in all its glory in the sunshine. It made my parting with Kay extra special and cheered an otherwise emotional moment. St Pancras Station was heaving with people trying to grab the last seats on the Eurostar train back to Paris or Brussels, as air travel is still disrupted by the cloud of ash spewing out of Iceland's Eyjafjallajoekull volcano. Fortunately Kay had booked a seat on her train up to Yorkshire, so we could take our time getting there. All too soon, I was waving her off and making my return journey home alone. I won't pretend it didn't seem strange, opening the front door and knowing there was nobody else inside. Even stranger was to cook a meal just for myself and sit down alone to eat it. Fortunately Snoopy more than made up for it, by bouncing around to greet me and putting in the occasional wolf howl for extra effect. Then, just when I wondered what I might do to while away a few hours in the afternoon, there was a knock at the door and there stood a woman and her husband who used to live next door to me thirty years ago and whom I have not seen in almost as long. We do however still stay in Christmas card contact and I had written to her to tell her about Greg's death. They came bearing a bunch of flowers too.It was lovely to chat and catch up on thirty years' news. It is amazing how a lot of good has come from Greg 's death. So many people we had almost lost contact with have rallied round to support me. My somewhat shaky faith in human nature has been restored.

As I write, it is growing darker and I have been putting lights on all over the house. It will seem strange that when I turn them out, there will only be Snoopy (and maybe the cat) to wish goodnight to. It's going to take some getting used to.

I have not written anything in a while because I have not felt like writing.....that and I have been too busy. But if I am honest, I felt too down to write. I felt everyone would already be sick of my regular moaning and whinging, so it was probably best I write nothing at all. But the longer I left it, the less I wanted to write. I sometimes wonder whether I should just stop the blog altogether. After all, my reason for starting it in the first place has now really gone.

Five weeks ago, to the very evening, I watched Greg die. It does not seem five weeks in some ways; in other ways it seems a lifetime. We were together for forty years: thirty-four of those as a married couple. What is five weeks of widowhood compared to forty years as a couple? A mere drop in the ocean and yet already I am getting used to the feel of saying "I am a widow". Already I am becoming a dab hand at filling in the ubiquitous forms, registering my status as "widowed". On Kay's student finance form which we filled in again this week for the forthcoming academic year, I am now the sole parent. Overnight, years and accustomed years of being "married" are replaced with the dowdy label of "widowed". I suddenly feel like I have concrete restraints around my feet, pulling me downwards into a place where nobody will give me a second glance. I feel I should maybe be dressed in black wearing a black net veil or should sit amongst the cobwebs Miss Havisham-like. With the change of status, I feel a tremendous change in my very being. I suddenly feel a hundred and two years old with one foot in the grave. Greg's suffering may be over. Mine seems to just be beginning.

They say there are various stages of grief. They are:

Some stages last a few weeks, others many years or decades. I think I have gone through a fair number of those stages in the last few weeks alone! I certainly have gone through denial - imagining that Greg is still in hospital, as he was there so regularly in the past five years. Sometimes the reality hits me that this time he will not be coming back. I have often felt anger. Why me? Why did he let this happen? Why did he start drinking and let it get so far? Why could we not have looked forward to a long retirement together? Then there is the guilt. I should have not said some of the nasty things I said when my frustration flared up and overspilled into venom. I should not have bought the whisky for him, when he was too drunk to drive to get it himself. I should have done more to bully the medics into doing something to stop him. I have already seen glimpses of the depression I know will definitely hit me, once Kay has left for university again and I am alone with my thoughts and an empty house full of too many memories, good and bad. I don't tell her this, of course. I am putting on my brave I-can-cope-with anything mask for her. But in the last week or so, she has been out twice with friends and slept over at their house, giving me a taste of what is like to turn out the light at night and just hear the sound of my own breathing for company. Those different stages of grief are coming one after the other in quick succession like a roller-coaster at the moment.

On a more positive note, the funeral was beautiful. So many people came up to me afterwards and said how much they had "enjoyed" it. Over about sixty people were there. About a quarter were family; about a quarter were work colleagues; a quarter were friends from the past; the rest were neighbours, close friends of mine and close friends of Kay's. Two (quite separate) people even turned up all the way from Scotland - one, an old work colleague, whom we had not seen for thirty years! The actual chapel service was put together by Kay and myself. We carefully chose the readings, the hymns and the music on a theme of his life in different stages and culminated in the Joni Mitchell song "The Circle Game". I wrote the history of his life which the clergyman read out. The funeral director was extremely helpful and friendly. The Order of Service, designed and printed by Kay, had photos of Greg in different stages of his life too, so it all seemed to fit. A work of art. Greg would have been proud of us. Afterwards we gathered for refreshments at a local club and everyone said wonderful things about Greg. It certainly helped get me through the otherwise difficult day. Greg would have so enjoyed it. Who knows? Perhaps he did.
Posted by ADDY at 23:32 26 comments: