One of my patients has been discharged from my care - I took my mother home a few days ago. She is not completely better, but had to return home for a long-standing appointment and wanted to try to fend for herself once more. I suspect she is not eating as well and has returned to taking the easy option of drinking a glass of Complan rather than even micro-waving a ready meal. I still have the canine patient, but he's chugging along.

On Saturday, Kay and I managed to escape for a bit of mother and daughter time and shared the company of Elizabeth McGovern, better known as Cora, Lady Grantham, of Downton Abbey fame. Actually she was playing the guitar and singing at the Taste of London, a food festival which has been in London's Regent Park over the last four days.
There was a lot to see, do and sample. 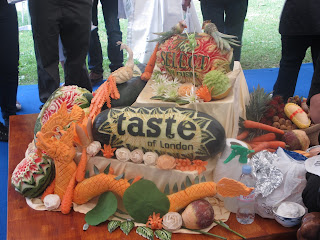 This attractive display of carved fruit and vegetables caught our eye, particularly the carved marrow and water melons. 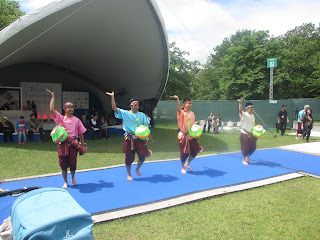 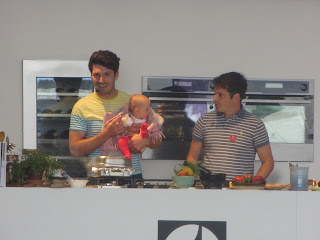 The Baker Brothers showing off a new arrival to their family, hopefully not part of the ingredients for their recipe demonstrations! 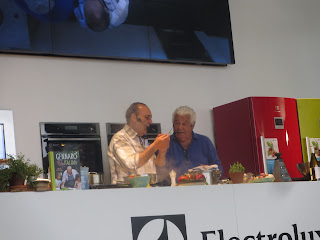 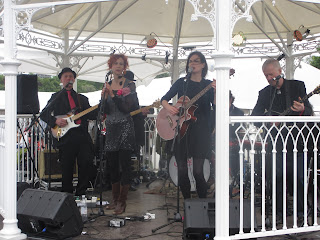 Elizabeth McGovern strutting her stuff. You can hear her here.

We  staggered home with lots of free samples and tummies full of several celebrity-chef taster lunches, including some beautiful Thai signature dishes. It certainly made up for the weeks of hard slog, caring for my patients.

Kay passed her driving test a couple of months ago and also sat the Pass Plus test a few weeks ago, getting a bit of practice on motorways. At 22, she is certainly not as young as she could be and, as a medical student, has her head screwed on, so it was with some degree of shock that we started to hunt for a  first car for her.  Nothing too expensive. Just a reasonable run-around to practice and perfect her driving skills, yet nothing too cheap, as she would need to travel between London and The North with it, as well as regularly travel to medical placements within a 30-mile radius of her uni.

Finding a car itself is no problem. There are quite a few to be had within our chosen price bracket of £3,000 - £4,000. But typing in the number plates of those on the short-list to find out the insurance premiums is another matter.  These, for example, are the options for annual cover on a nine-year-old Vauxhall Corsa. 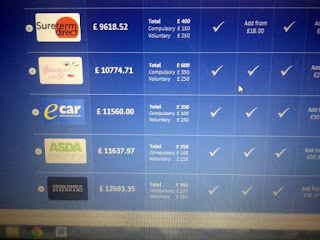 What 18-year-old would pay £12,693 per year to cover a geriatric Corsa worth about £3,000? It defies belief. (Apparently it reduces a bit if she adds me as a named driver on her policy, even if I don't ever set foot in it.)  Maybe Lady Grantham can lend us her chauffeur. At those prices, it would be almost as cheap.﻿ 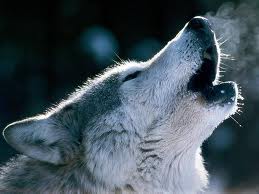 picture courtesy of www.firstpeople.us
Thank you so much for all your comments and well wishes. I wish I could thank you individually but I have been seriously chasing my tail over these last few weeks. Both my patients continue to require 150% of my time and, as you know that is nigh impossible, unless you run yourself flat into the ground, which is pretty much what I am doing.

My mother has been with me for five weeks now and it is  six weeks since she had the fall. Sadly she is still in a lot of pain. I have taken her twice to our local Accident and Emergency Department (once at the three-week stage and again at the five-week stage)  to see if anything else had been overlooked, but each time they confirmed that all else seemed to be in order  and that she "just" has cracked ribs which will take many weeks to heal, especially at her age. The trouble is she has also had a flare-up of gastric trouble, because of all the painkillers she is taking, and is not eating, feels nauseous and has terrible indigestion. I did wonder at one point whether some vital abdominal organ had been punctured by a jagged rib, but with six x-rays on her spine/ribs and a further two x-rays on her abdomen, as well as an ultrasound scan, nothing alarming  was found, although the utterly charming Italian doctor said to my 90-year-old mum "we are just looking for babies"!  She has now been put on the very strong painkiller Tramadol which is helping to blot out the pain by rendering her comatose most of the time. Meanwhile, I run up and down the stairs in my lighthouse-like domicile with cups of tea, meals, snippets of news, a plump of the pillow and the drugs trolley. At least it's keeping me slim!

My other patient, Snoopy the dog, has been on the critical list. In fact on Bank Holiday Monday, when Kay was home for the long weekend, we were 95% on the way to the vet to have him put down. He was not eating, not drinking (which considering he now has kidney failure to add to his woes, it is essential he drinks), he was lying listless on his bed and occasionally trembling, we presumed in pain. The vet had very kindly left his mobile number on his surgery answer-machine - strictly for emergencies - so we texted him for advice and he agreed to come out to  the practice to do the deed. However, as one very last resort, I gave Snoopy a canine painkiller and within a hour or so, he had completely rallied round and was looking lively and full of geriatric zest. Since then it has been a bit of a roller-coaster, resembling a Whitehall farce.  Because of his incontinence, I have washed his bedding and sofa covers almost on a twice-daily basis, bought toddler nappies  for him to wear at night, but having to cut holes in them to accommodate his tail has meant wads of disintegrating nappy lining blowing around the room like tumbleweed in the morning. He has thrown up on carpets, come in from weeing in the garden and then, only once safely inside,  absent-mindedly pooed on the kitchen floor and looked so endearingly at me that I could not possible contemplate euthanasia. Talk about crying wolf!

My mother has my bedroom, as it has an en suite bathroom all on one level which she can manage comfortably. She sits in my lounge chair as it is the only one she can get in and out of without too much pain. The dog wees on all the others. I sit and sleep where I can - at one stage on a 1" camping mattress on the kitchen floor so that Snoopy, who has separation anxiety and always has to be in glancing distance of me, had quick access to the garden at night, when he was at his lowest point.  I felt like Cinderella sharing quarters with Little Red Riding Hood's wolf. And so you see how enriched my life is, right now, and why I haven't been blogging. Hope things are better in your neck of the woods.
Posted by ADDY at 10:00 13 comments: