Following on from my last post on Passchendaele, I thought it only fair to mention that my paternal grandfather was on the other side in the First World War. I am a mongrel, being half German, a quarter English, an eighth Irish and an eighth French. No wonder I am confused. 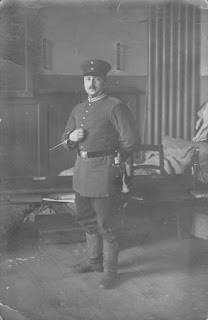 My paternal grandfather was born in Berlin and, like my maternal grandfather, also enlisted early on in the war. He fought for a time in France, where he was shot in the leg and then, after he had recuperated, he was sent to the Russian front which was notoriously freezing and conditions were unbearable. He was awarded the Iron Cross for his bravery. Ironic really, as he went on after the war to marry a girl with Jewish connections (he was Lutheran) and in 1939 they were forced to flee for their lives and settle here in England, some number of months after their two teenage sons (one of them my father) had already come here with the Kindertransport. 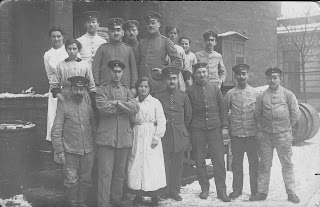 When my mother and father got together in the Second World War, announced their engagement and introduced both sets of parents to one another, my two grandfathers amicably shook hands and joked "I bet you were the b*****r that shot my leg/eye".  It was good that they could be so forgiving, given the extent of their injuries. It does however highlight the futility of war - human beings but for the grace of God on opposite sides ordered to kill one another. We haven't learned the lesson of the last hundred years - war still goes on all over the world at any given time and will continue to do so alarmingly, if Kim Jong-Un and Trump get too trigger-happy.
Posted by ADDY at 09:34 4 comments:

I remember my maternal grandfather very well. My parents and I lived in the upper storey of my grandparents' house until I was eight and after that we moved a few miles away, but still visited him and my grandmother regularly. At least once a week. He died when I was 26, so, yes, I guess I remember him well.

When I was old enough to study French at school, he would boast that he too could speak French. It was just the odd word, but he liked to show off, throwing words like "oeuf" and "petit dejeuner" and "boeuf, s'il vous plait, madame" at me, as if it made him fluent. I subsequently discovered it was a handful of words he had picked up from his First World War days in France and Belgium, when trying to order food in villages, as the soldiers passed through.

As a child (and female at that) I was not particularly interested in what he had done in the war. Come to think of it, he was none too keen to regale us with stories, as I think it was all rather painful and horrific. There was no such thing as Post Traumatic Stress Disorder in those days and precious little in the way of counselling. People just had to man up and cope the best they could. I did pick up that he had terrible pain in his legs from the shrapnel wounds and when the shrapnel moved around he would suffer from terrible headaches. He used to shout a lot when that happened. My childhood chattering and running about on the floor upstairs used to make his headaches worse apparently. As a small child, I was fascinated with his glass eye. I never quite cottoned on which eye to focus on, when I spoke to him,  not really understanding that the glass one would not actually see anything.

The little I do know was that he fought at Mons, Ypres, the Somme and at Passchendaele. He was in the Royal Artillery and had a black horse called Smiler that pulled the gun carriages. It was at Passchendaele in 1917 that my grandfather was badly wounded in the leg and lost his eye. Not only that but, in the same explosion, Smiler was fatally hit and that upset my grandfather more than anything. My grandfather was brought back to England to be nursed and his eye apparently ended up in Northampton Museum. That was the end of the war for him.

It is exactly one hundred years since that battle at Passchendaele.  My mother still has his medals and some excellent needlework he did while recovering in hospital. As I think of him now,  I so wish I had asked my grandfather more about his experiences. As always, we leave these things far too late. 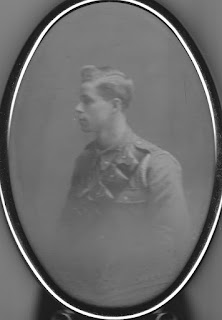 Mum is in immense pain. The driving-you-demented kind of pain. Think of a pain and multiply it by one hundred. THAT kind of pain and I am tearing my hair out trying to help her.

It all started last year. Back in May 2016 at the ripe old age of nearly 93 she had a knee replacement operation on the right knee. She was booted out of hospital after a few days and then went on to have a week's respite care before going home. The knee more or less behaved itself for a few months, but by November, she was getting intense pains up and down her right leg from her knee to her ankle. In addition to that she had swollen legs (on both sides) so that her ankle and shins were the same thickness as her thigh. I won't bore you with the minute detail, except to say the diagnosis changed from DVT to cellulitis to arthritis each time we saw anyone for help.

In March the GP referred us to an orthopaedic consultant, or at least that was the plan. By July we had not heard a bean from anyone.  Meanwhile in May she suddenly developed a leg ulcer the size of a kiwi fruit which looks black and yellow and frankly deadly. District nurses have been coming in to dress it twice a week and each time tut and murmur about it getting bigger and not responding to treatment.


In early July, my mother fell out of bed (asleep!!) four times on almost consecutive nights within the space of a week. Her panic alarm system called an ambulance each time and I was woken by a shrill telephone call in the wee small hours to attend too. Each time she was scooped off the floor and (surprisingly) had broken nothing. Her observations (pulse, GCS, blood pressure, blood sugar etc) were all fine, so the ambulances left without her. However, it would seem after the last fall she had done some damage to her ribs and was getting pain there too. There's not a lot you can do about cracked or broken ribs, except take painkillers. I puzzled hard and long as to why she had suddenly started to fall out of bed at such alarming regularity when I discovered she had been hanging her throbbing leg out of the side of the bed to get some relief and in her sleep had just slid out behind it. In a heap. On the floor.

Two full-length parallel bed rails were commissioned pretty smartly via occupational health at social services. But it seems the rails can only be raised and lowered if you are outside the bed. My mother lives on her own, has no carers and is fiercely independent. How on earth is she supposed to get out of bed if the rails can only be lowered from the outside? The compromise has been to only have one rail up on the side of the double bed she sleeps on and to build a bank of pillows on the other side to stop her rolling out that side, where the rail is down.

However the pain is so excruciating that the latest development is that she cannot get more than an hour's sleep in bed before she is getting up to move to her very deep old-fashioned armchair, as she finds hanging her legs down is more comfortable. She's spent the last three weeks sleeping in that armchair.

Painkillers do nothing at all. We've worked our way up from paracetamol to codeine to tramadol to morphine patches and back down again - nothing works and the higher you go, the more woozy and dizzy she becomes, so more at risk of falls. Two weeks ago we saw a private orthopaedic consultant (we were fast-tracked to a private one by the GP as the wait for an NHS one had gone over 3 months) and their view is that my mother has both vascular problems and neuropathic/nerve ones too, each requiring different contradictory treatment. For the vascular problems and the swelling, you need to raise legs, but for the neuropathic pain, my mother finds it easier to let legs hang down. It would seem the pain may be attributable to a trapped nerve caused by the knee replacement operation, although the jury is still out on that one.

My mother has now been prescribed pregabalin - a drug primary used for epilepsy but with useful application for nerve pain. (We scared ourselves half to death just reading the leaflet that came with it and were very nervous about starting it.) The side effects can be horrendous.  Not only that,  the drug has to be taken in steps to allow the body to acclimatise, so you start on a low dose and build up gradually over about a month. First one tablet at night, then one in the morning too, then two at night, then two in the morning too and so on. We are halfway along that course and still there is not the slightest improvement to the pain, yet spectacularly my mother is slowly losing her marbles. One of the side effects is confusion and, boy, is she confused. We spent a good part of yesterday morning discussing something in great detail over the space of two hours, only for her to ask me a question as I was leaving, which showed not a single sentence of it had gone in at all. I'm not sure if it is the pain or the drugs or dramatically sudden onset of dementia.

My life is not my own at all at the moment. I have been going in every day mid-morning to make her coffee, deal with problems, cook her lunch, wash up, make supper to leave in the fridge, administer pills and
leave her with a cup of tea, before I crawl home at 3-ish, somewhat disheartened by the physical and more alarming mental state of her.  She is in so much pain and we seem to be getting nowhere fast. She talks of Why Me? and I'm past my sell-by date and she is already telling me what to take of her personal effects, as I may not be around much longer. She has suffered with arthritis and back pain for a good deal of her life but this is different. The district nurse this morning said she will chase something up which has been outstanding and we are planning yet again to badger the GP (currently on annual leave).  Nobody deserves to be in that much pain, but we seem to be getting nowhere fast at the moment.