Well, the new year has not been good so far. First I had a flood. Because of a blocked drain somewhere, my washing machine could not empty out and water pumped up the outflow drain pipe all over my garage floor (where the washing machine is situated). Worse, many decades ago, Greg had laid lino down on the garage floor to make it look more like a utility area - where my tall freezer also stands - and also to deaden the sound of the concrete below and the flood had trickled under the lino too. This was all unbeknown to me for a few wash loads until the lino could hold the water beneath no longer and made itself more visible.

I had to call a plumbing company out to unblock the drain, but then I began the mammoth task of pulling up the lino, now badly stained and smelling badly too! I have since ordered some rubber jigsaw-like tiles to lay down in the garage instead. This is a work in progress but I am already pleased with the new look. 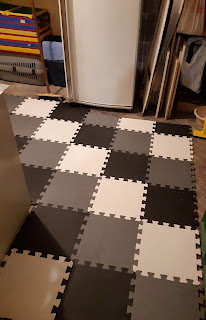 The next thing to go wrong was that my laptop suddenly refused to turn on and the whole thing felt so hot as if it was going to burst into flames. I normally keep it permanently plugged in on my desk, so maybe the battery was overheating. On Kay's advice, I unplugged it and let it cool down after which it turned on, but not before I'd checked with the laptop manufacturer whether it was covered by the warranty (it is!) Panic over, but I wasted a whole day worrying I would have to get a new one when this one is only 18 months old.
I am also looking for a new new bed. When Kay and Darcy moved to their first house on 12 November, I offered them my bed as a guest bed. I had intended to buy a new bed anyway, as mine was over 30 years old and they advise you to change mattresses more often than that. If truth be told, I was of the "if it aint bust, don't fix it mentality" but my conscience told me it was maybe time, hence the offer to  give it to Kay as a spare bed. My bed disappeared in the moving van on 12 November and, as those of you who read my blog regularly know, I injured my ankle then and subsequently caught Covid, meaning I was marooned at home for 7 weeks and couldn't get out to choose a bed.  Instead I have been sleeping since 12 November on a 2-foot-wide camp bed which is the most uncomfortable thing on this planet. I have only just this week started to look around at what is available and I am wracked with indecision as there are so many variants on the market. Pocket springs, memory foam toppers, latex foam toppers, medium or firm tension, ottmans, drawers underneath, wooden frames or divans. One minute I have decided, the next I am undecided again, so I can't see me escaping the camp bed for another week or two and that's assuming I can get a quick delivery.
First World problems, I know, but already I hate 2023.

Oh I am sorry you've had such a difficult start, Addy. I wouldn't know where to start with choosing a bed so I do sympathise. I suppose the best way is to go and bounce on them and try them out... good luck. Well done on the jigsaw tiles by the way - they look fantastic!

Sleeping on a camp bed? Good heavens! Do you imagine it's World War II and you have joined The Women's Land Army? By the way, if everyone followed the credo - ""if it ain't bust, don't fix it!" plus "Make do and mend", the climate crisis we are all facing would be less severe.