Last week I managed to finish decorating my bedroom, wall-papering the bedhead wall, and was quite pleased with the look I had achieved. Apart from a few finishing touches still to do, like new curtains and a new bed, I was happy that I was seeing real progress in the house. 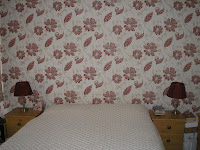 Only two more rooms to go and the house will be spick and span - well, more spick and span that it was a year ago. At least now I do not feel ashamed to invite people in to what was once nictotine-stained ceilings and cracks in the walls! Paintwork is bright, walls are clean and there are a few feminine touches here and there (Greg hated flowery patterns of any kind, so many of our furnishings were a geometric pattern or plain as a compromise).


The two bedrooms still to be done are not rooms I use regularly, so I was quite pleased that the house was relatively finished, so far as I was concerned. I could breathe a sigh of relief and take things a bit easier from now on . I mentioned in my last post that Kay and I would be clearing out the cellar this week, but apart from that nothing on the horizon for a while and my bank balance could recover from all the one-off expenses of new furniture or curtains or rugs.

At the start of the week, I asked Kay to hold on to the step-ladder outside for me, as it was balanced on uneven ground, while I precariously climbed to the very top step to prune a clematis montana. This clematis belongs to my neighbour and grows up the wall between her front door and my adjacent garage door. As anyone who has ever owned a clematis montana knows, these are prolific growers and mimic triffids. Great, if you want to cover a whole wall, but not great if you don't want a triffid. I had asked my neighbour's permission to prune it back hard, as it was growing into the brick tiles that cover the front of our house between the storeys. Once the tendrils get in behind the tiles, they can force the tiles to crash to smithereens on the ground. Apart from being irreplacable nowadays, the falling tiles could also kill someone as they have pointed edges, similar to the ones in this picture!

The original neighbour who planted it had cut it back over the years but in one instance had failed to cut a rogue piece out of the tiling and it had taken on a life of its own. Without any roots in the soil,it seems it did not even need earth to grow in as it was sprouting a whole new independent bush of its own from the dark of the back of the tiles. With this in mind, I happily set about pruning the monster - there were tendrils everywhere, trying to attack me as I fought my way in. I tugged at the handfuls growing into my tiles and successfully managed to free them, either with brute force or with the aid of seceteurs. By the end of the operation, Kay was knee-deep in what I had cut back, but it was a mere fraction of what was still growing up the wall. And then, to my utter horror, I noticed a little thin wire coming down through the tiles from my bedroom window to the garage beneath, which was dangling in the breeze and clearly severed in two by the seceteurs. It had been obscured by the monster. My heart sank as I had a feeling I knew what this wire was for. The fact that I had not electrocuted myself in the process confirmed my fears..... I had cut off our telephone/broadband link. Rushing inside and testing the phones, I confirmed it further. Unprintable words were uttered at this stage.


To cut a long story (or clematis) short, I rang British Telecom and after two days without phone or internet (how ever did we manage before?), an engineer came round to fix it. He was with me for TWO HOURS, scratching his head and trying to work out where the wires came from and where they should go. In the end, he had to drill new holes in my bedroom window and lead the wires across newly painted walls and paintwork, stapling them with his little gun into my newly decorated bedroom. In order for him to do this, I aso had to move my furniture out of the way for him, so by the time he left everything looked like a bomb had hit it.


Now I have to touch up some of the paint work again and the worse is I have to pay BT a hefty bill (they quoted me £130 for the call-out charge alone, not to mention the two hours' work). What a bloomin' nuisance and an expensive clematis!

bad luck! How annoying this side of the decorating too - Always seems to be the way doesn't it you get something done just right and something comes along to remind you that you should never believe it is finished! Hope the bill isn't too much

arrrrgh - how very annoying. I screwed a floorboard into a water pipe once in 3 places before I realised there was water coming through the downstairs ceiling!!

Life is very much out to get us sometimes!

I guess looking on the bright side it wasn't an electrical wire you accidentally cut? that would have made Kay an orphan. scary stuff.

£130 callout, what a bloody bunch of pirates BT are. That is ridiculous. I hope they don't hit you for two much more.

You really have done yourself proud in the home, I don't know where you find the energy. If you can bottle it I'll take a couple of bottles up here please.

to live here on earth is not easy :))

to live here on earth is not easy .. isnt it :))
I lost some of my main keys .. normally I never loose keys , but that one still remains hidden

Sorry to hear about the events. I did the same thing at my previous house but I'm pleased to say it was a virgin cable and they never charged me. Perhaps, you should tell Bt what the competition charge and see if they will go easy on you.

Oh, blooming heck, what a nuisance after your beautiful decorating. BT don't seem to mind where they trail those stapled up wires. Mine run along the edge of the kitchen ceiling and when I was decorating that room last year, found them very tricky to paint underneath.

The pictures you have displayed of the house over the months show the house to look stunning. It must be a pleasure to come home to. I am glad that you and Kay are both well. Take care.

Glad the house is looking good. I read your endeavours with a wry smile...we've just lopped off a mountain of ivy which was threatening to overwhelm my old cottage...such a shame as these plants look great even if they're very destructive

Oh that's so annoying! I've always liked clematis ... now I'm thinking again. I'd go and kick something if I were you!

I've got a BT engineer coming round on Thrusday as my BB is ery intermittent right now. HOpe I don't get clobbered like you!