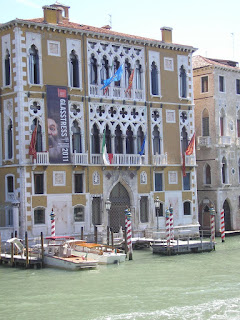 It seems a million years ago since I was in Venice, although it was just little over four weeks ago. On my return, I scooped up my mother who was suffering from a persisitent stomach bug and brought her back to London with me. She had been ill all the while we were away and her weak voice on the phone, when we rang from our hotel, sounded really bad, although she tried to convince us otherwise, so as not to worry us. Two weeks in the Alcoholic Daze household with meals brought to her bed or armchair had her leaping about like a frog on amphetamines! She is now back home again and coping well on her own. Of course, all the running around up and down my endless stairs to care for her, has left me exhausted and in need of another holiday!


I promised to write more about Venice, though, and I am so grateful to Kay for giving me the opportunity to see it. I really fell in love. I knew I would. I have been wanting to go there for so long and it did not disappoint. From the moment our plane circled over the lagoon to land and I saw the evening lights of Venice twinkling below me, I was as excited as a child in Disneyland. Our transfer from the airport had not been included in the package and I was a little apprehensive about two women arriving so late in a city we did not know, but picking up a bus from the airport to the heart of Venice was effortless (negotiated in my very pathetic Italian - I did study Latin to the age of 22, so it was somewhat similar) and at my first glimpse of the Grand Canal, I could have cried. Having done my homework beforehand, I knew what public transport to take to get to the hotel - a number 1 water bus whose route travels the whole length of the Grand Canal and back. The Grand Canal by night is beautiful with every building illuminated. It was magic. Our hotel was not right in the centre, but in the Dorsoduoro area - a ten-minute gentle stroll through medieval alleyways and squares littered with cafes, across bridges and quaysides. It took us past shops, cafes, famous churches and museums so it was never boring, nor was it menacing at night.


Along the canal by our hotel 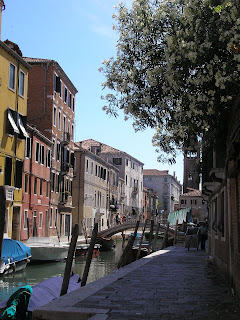 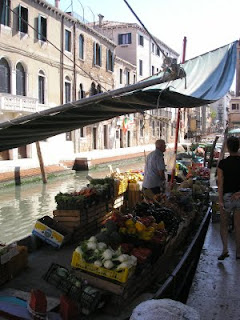 
Over bridges
big and small 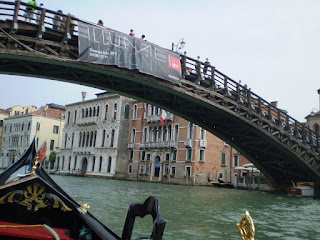 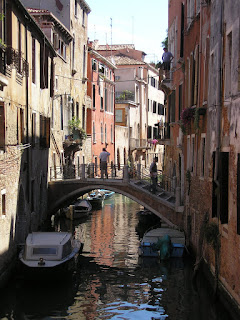 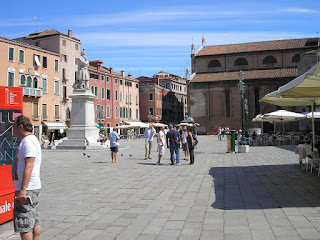 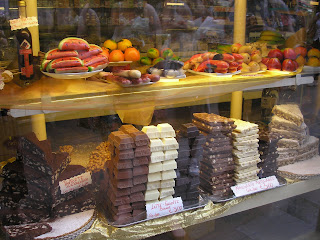 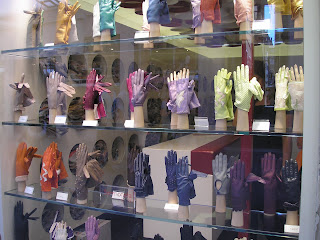 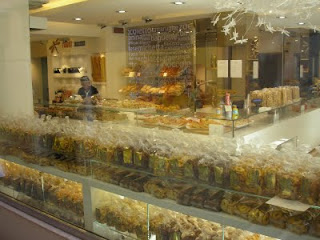 As we were there for four days, we explored a different quarter of the city each day. It was quite manageable on foot and we only took a water bus to save our feet now and again. (It didn't save time as the water buses chugged round the bends in the canals, whereas we could take the quickest straight route on foot.) We saw magnificent churches, what seemed like hundreds of palaces lining the Grand Canal (every rich merchant worth his salt built a fabulous palace for his family in the grand old days) and shops to die for. We ate food we loved (what is not to like about Italian food?), listened to a Vivaldi concert in beautiful baroque surroundings and finished off each day with a tantalasing selection of ice cream. 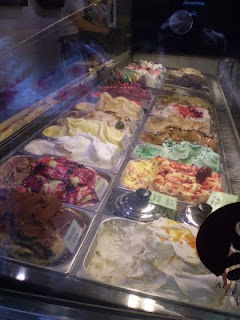 Even the street buskers were in a class of their own.


The only negative side to the holiday was a) the ubiquitous crowds of tourists (in some places you could barely breathe out, it was so crowded) but then I was a tourist too, so I cannot really complain; and b) the £/Euro exchange rate was so bad that it really did seem very expensive, but then I am sure the locals do not pay the prices the touri 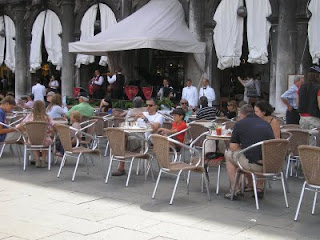 sts pay. The biggest shock was paying £30 for two coffees at the Florian Cafe on St Mark's Square. Even allowing for the £12 surcharge for the music, each cup of coffee was £9. Needless to say we took advantage and paid a visit to the loos there every time we passed by for the remainder of our stay in Venice.


This trip counts as one of the truly great holidays I have ever had: in truth I did not want to leave. 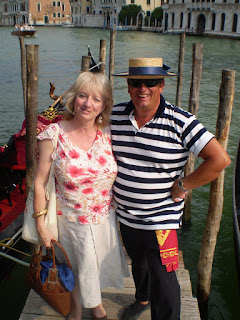 A gondolier who insisted on having his photo taken with me!
Posted by ADDY at 18:38

How fabulous! And thank you for those photos, it took me back. We went to Venice on our honeymoon and arrived by night, magical. We went back for our 10th anniversary and it was just as beautiful. Can't wait to take Izzy one day. Looks like you fell in love with the place, too!

So glad your mother recovered under your tender care.

Really enjoyed that. Such a beautiful place though I would have a problem with the crowded areas too. Lovely photos too. Must have been nice taking a nice leisurely ride down the water. I do like how a lot of European places can be walked around without having to jump on transport every 5 minutes.

Great that you had such a wonderful time and also that you got your mum back on the mend.

The aftermath of a holiday is often that you need another holiday!!!

Glad your Mum is on the mend...

it really is the most magical place....friends insisted we go 2 years ago as we had avoided it thinking it would disappoint, but i'm sure no one could fail to fall for it charms....and as for it being busy, you can always duck down an alley and find a quiet spot cant you. have you seen the bbc francesco da mosta programs . get the dvd and it will keep the magic alive a little longer.

Looks gorgeous...somewhere I'd love to go. Glad your mum is more spritely too

So glad you enjoyed it so much!

Hi Addy, I'm now attempting to catch up with blog friends following my long trip when I completely lost touch with everyone. It's brilliant that you had such a good holiday. I love Venice too. The first time I went I was amazed at the priceless "old master" paintings in the churches.

It sounds absolutely wonderful. My niece is going to be in Venice for 3 months so may well go and see her! Am so glad ou had such agood time .

Kelloggsville put a link to this post on her blog so I came over for a nosey.
Your photos of Venice are fantastic - I remember the glove shop very well from a trip we made to Venice a few years ago. A magical place.

I don't think anyone ever forgets the first time they see Venice - we all know about the canals and the water but when you actually see it it just takes your breathe away doesn't it??

ADDY
London, United Kingdom
London housewife, mother of a 29-year-old daughter (Kay), chauffeur, cleaner, cook, nurse, paperwork manager, interior decorator, gardener, former carer (for elderly mum) and part-time individual (well, that's how I feel after I've done all the above!) Trying to cope with the stresses and strains of watching my alcoholic husband (Greg) sink slowly from my grasp - he died in March 2010. To read about living with an alcoholic, look up the archive between May 2008 and March 2010. My story is true. Only our names have been changed to maintain our anonymity.